Tigers are Released in Spite of Protests 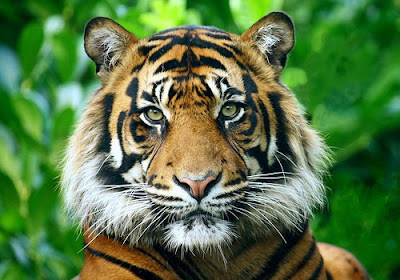 
Before releasing them at TWNC, located within the Bukit Barisan Selatan National Park (TNBBS), forestry officers attached collars linked to GPS around the Sumatran tigers' necks to monitor their movement. The collars have been designed to fall off in two years.

The GPS collar will submit data every eight hours to supervision stations located in six places: the TNBBS center in Tanggamus, the Biological Diversity Directorate in Jakarta, the Safari Park in Bogor, the TWNC in West Lampung and two monitoring stations in the Arta Graha building in Jakarta.

In July 2008, businessman Tomy Winata took five tigers from Aceh, which were believed to have attacked residents in Aceh. They are named Agam, Pangeran, Buyung, Panti and Ucok. Agam and Pangeran were released into the wild by then forestry minister M.S. Kaban at TWNC on July 22, 2008.

Minister Zulkifli said the condition of the forest where the two tigers were released was strong compared to other areas in Lampung and other parts of Indonesia. "Many animals of prey are found in the area, such as wild boars, deer and wild ducks. There's no need to worry about food shortage in the jungle," Zulkifli said.

Conservationists remain opposed to the tigers' release in the area that borders with human settlement. They blamed the government for neglecting the Belimbing community's rights.

"The tigers' release in TNBBS, which borders with the settlement of the Belimbing community, shows that the government and the Lampung administration cannot protect their citizens," Lampung chapter Traditional Communities Alliance (AMAN) head Ichwanto M. Nuh said.

Belimbing clan head in Pengekahan Khusairi Gelar Raja Muda, 51, said members of the traditional community refused to move from the area because they had proof of land rights in the forested area. "During Kaban's tenure as minister, he promised to relocate us to a safer area. However, the relocation of 164 families, or 500 people, has not occurred," he said. West Lampung Regent Mukhlis said hundreds of residents had been living in Way Haru village since 1942. Although they live within the national park, the government has recognized their village as a legal enclave.

"They cannot be categorized as squatters because they lived in the area before it was mapped and included within the TNBBS. However, efforts to ask the minister to issue an approval to relocate residents have been in vain," Mukhlis said.

Tomy Winata set up the TWNC in 2003. It has since been managed by PT Adiniaga Kreasindo, Tomy's subsidiary company. He obtained a concession to manage around 30,000 hectares of the TNBBS as a tiger conservation area. According to Tomy, his company informed