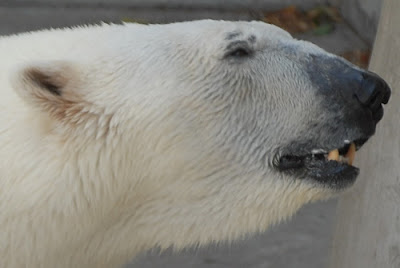 
Curiosities: How can a polar bear survive in a Wisconsin zoo?

“Wisconsin bears in zoos may not be in an environment as extreme as something like a tropical zoo,” says Kurt Sladky, assistant professor of and section head of the special species health service in the School of Veterinary Medicine at the University of Wisconsin-Madison. “Even in Alaska and northern Canada, the temperature can get up to the 80s in the summer. So they’re adapted to not only the really cold environment and icy cold water, but they do OK in warmer summer conditions.”


Still, keeping cool can be tricky. That’s where a polar bear’s special features come in.

“There are some really interesting adaptations,” says Sladky. “They’re big, but they’re more streamlined, which some people believe is designed for swimming. If you imagine a polar bear head, it’s narrower than a grizzly bear head. Their big wide, thick paws can act like both snowshoes and paddles.”

Perhaps best known — but, surprisingly, not white — is its clear hair, with a dense undercoat and hollow guard hairs outside. It captures air to insulate against frigid water. Few of us get close enough to see the oily black skin underneath; some believe that it may help absorb heat.

Just like humans, polar bears seeking to beat the heat can take advantage of icy pools or air-conditioned indoor areas. Unlike humans, however, the bears also love diving for blocks of ice filled with frozen fish. They also stay busy in and out of the water, chewing not only ice,

Read Full Article
Posted by Peter Dickinson at 10:13 AM