Panic in Zoo as Tigers Escape 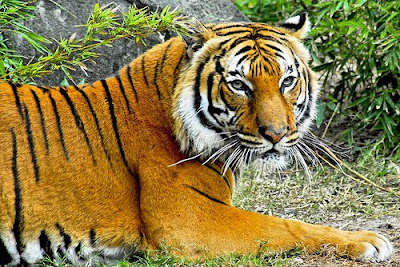 Two adult tigers Saturday escaped from an enclosure at the Assam State Zoo in Guwahati, triggering panic among nearly 10,000 visitors who were inside the zoo at that time, wildlife officials said.


Guwahati, Jan 30 (IANS) Two adult tigers Saturday escaped from an enclosure at the Assam State Zoo in Guwahati, triggering panic among nearly 10,000 visitors who were inside the zoo at that time, wildlife officials said.

A zoo spokesperson said the two big cats managed to sneak out of their iron enclosure when three animal keepers were disinfecting it by opening one of the cage doors.

'The two tigers came out of the enclosure and started walking lazily in the open leading to great amount of panic and fear,' zoo warden Narayan Mahanta told IANS.

The zoo, the only one in Assam, was teeming with people with an estimated 10,000 visitors inside the premises when the two tigers walked out of the enclosure.

'We immediately evacuated the visitors and tried to locate the cats before tranquilising one of them relaxing by the side of a pool inside the zoo,' Mahanta said.

A large contingent of police and wildlife officials rushed to the zoo and managed to tranquilise the other tiger around noon.

'The entire operation took us about three hours before both the cats were tranquilised and taken to safety. They are now under observation by a team of veterinarians,' the zoo warden said.

No one was injured with the tigers slowly walking around the zoo even as thousands of visitors simply ran for their lives seeing the cats on the prowl.

'We were terrified to see the two big tigers majestically walking past and simply ran for life,' a visibly shocked Arun Das, a college student, said.

'I saw the tigers from say a distance of about 20 feet from me.'

Zoo authorities have since ordered a probe to find out how the tigers managed to get out of the enclosure that also houses seven other big cats.

'We have already begun a high level enquiry into the incident, although I must say all the animal keepers engaged in the zoo are dedicated and experienced,' Mahanta said.

In 2007, a 50-year-old man was mauled to death by a tiger in the same zoo when he scaled a barricade and went close to the enclosure to click photographs of the cats, while another visitor in 2008 was seriously injured by a Himalayan black bear after he jumped into the animal's enclosure

Read Full Story
Posted by Peter Dickinson at 9:12 AM