in Prague Zoo embarked upon a round of enclosure exploration of his 'Indonesian Jungle Pavilion' home.

Climbing along ropes and branches without a problem he became encouraged and made an attempt to explore further. An attempt to climb and swing upon some palm foliage ended in disaster as it gave way causing the unfortunate animal to fall into the deepest part of the water filled moat below. 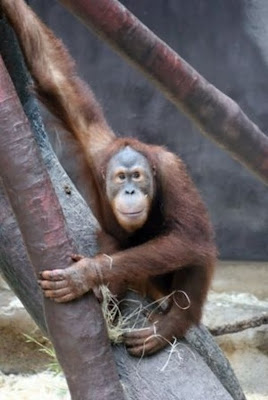 Without a moments hesitation the brave keeper Denise Ryšková jumped into the water to rescue him. She was quickly assisted by a pavilion gardener, Zdeněk Loužil,  and between them they managed to pull the animal out of the water. He appeared in a bad way but  was immediately placed into the recovery position and then aid administered. He coughed up a large amount of water and quickly showed improvement and struggled to his feet.


Pagy was then persuaded into an off show area where he could be dried off and given veterinary supervision.

Credit is due to his two noble rescuers.
Posted by Peter Dickinson at 5:43 PM