The annular eclipse on Thursday had no effect on animals at the zoo, even the citizens if the thousands of visitors to the zoo are an indication, but it appears to have affected only the zoo keepers. 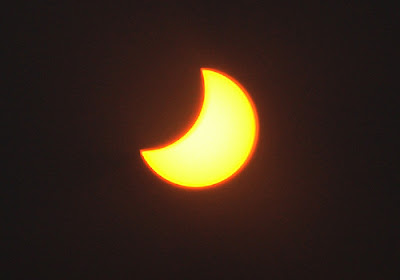 Neither the eclipse nor the change of the feeding time had any effect on the animals who were absolutely normal. The birds were chirpy, the tiger napped under a tree in his open enclosure, felines paced around in their cages, a chimp danced in his enclosure, and the snakes slithered around lazily as ever.

With many the citizens having given themselves a voluntary holiday, the zoo officials’ day began with calls wanting to know if the zoo was open for the day. As the day wore on, hundreds of families, local as well as tourists visited the zoo.

Asked why the food was served early, Dr C Suresh Kumar, assistant director of the Zoo Hospital said some animal keepers insisted that it was better to feed the animal before the solar eclipse starts which was accepted without questioning. Accordingly, the zoo staff prepared the food as early as possible and served the animals and birds. But as per the animal keeper’s advise the plans to shift a baboon to a new enclosure by tranquilising was postponed to tomorrow (Saturday) because of sentiments.

Contrary to strong belief that the birds and animals behave abnormally during Solar eclipse, the animals and showed no change in behaviour. Dr Suresh Kumar admitted that it is difficult to say whether the animals and birds behave abnormally on a solar eclipse day without conducting a scientific study in this regard. There are more than 1,200 birds and animals of 140 different species and conducting scientific study on all of them is difficult. As the birds are kept in enclosure covered on all three directions there is no scope for them to feel or experience the rays. “I went around the enclosure of almost all the birds and animals and all of them were found to be normal”.

Manager Shivanna, who has 25 years of experience in the zoo echoed the views of Dr Suresh Kumar. But, out of curiosity, animal keepers were asked to closely observe their respective birds and animals and report in case of