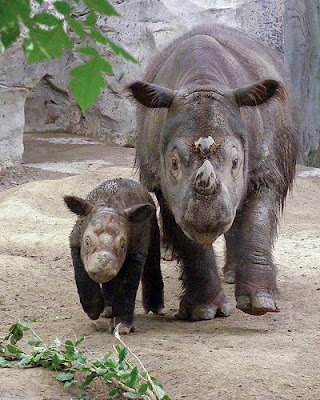 After successful breeding of Sumatran rhinos in captivity, Indonesia aims to produce seven offspring of the endangered species over the next decade, a conservationist said on Friday.


“If [rhinos] are in good condition in captivity, we can progress to 17 individuals in the next 10 years,” said Susie Ellis, executive director of the International Rhino Foundation. “There are 10 animals currently in captivity. Six of them are fertile and expected to breed seven offspring.”

In 2001, Emi, a femaleSumatran rhino at the Cincinnati Zoo, gave birth to Andalas, followed by Suci in 2004 and Harapan in 2007. They are the first generation of Sumatran rhinos bred in captivity since 1889.

Emi died in September because of an iron overload, a disease known as hemochromatosis that normally affects animals in captivity.

The population of Sumatran rhinos has decreased 50 percent over the last 15 years because of poaching and habitat encroachment, Ellis said.

The International Union for Conservation of Nature reports there are only around 200 Sumatran rhinos left in the world, with 170 spread throughout Sumatra’s Way Kambas National Park, Bukit Barisan National Park and Gunung Leuser ecosystem. The remainder inhabit Sabah, Malaysia.

“We used to have the impression that captive breeding could decrease the population in the wild, which was rapidly declining. But it turns out that it’s much safer to breed them in captivity. However, they will be reintroduced [to the wild] so we still need to protect the habitat,” said Widodo Ramono, executive director of the Indonesian Rhino Foundation (YABI).

The zoo’s breeding program is part of the Global Sumatran Rhino Propagation Program, managed by the Sumatran Rhino Global Management and Propagation Board, which enlists government agencies from Indonesia, the United States and Malaysia, as well as YABI, the Cincinnati Zoo, the White Oak Conservation Center and the International Rhino Foundation.

Terri Roth, vice president of conservation at the Cincinnati zoo, stressed this was a global movement, so it was important for it to be managed as such.

“So when they needed a new male for the Indonesian sanctuary, we honored that by sending Andalas to Sumatra Rhino Sanctuary [in Way Kambas National Park]. This is how it works; animals move from one place to another to ensure that we succeed [in breeding them],” Roth said.

“We had a lot to learn when they came into captivity. We had to learn on how to feed them, care for them, and then breed them, and none of it was easy. In Cincinnati, we try to use science to try to learn more about the reproductive physiology of the species so we can pair them. It’s not an easy species to breed, but we’ve made tremendous progress,” said Roth, adding that Andalas could make better progress breeding in his native habitat in the park.

“He will be very successful in Way Kambas because the facility in Way Kambas is lovely. I wish we had the same in Cincinnati, but we don’t have the same environment, so it’s more natural [in Way Kambas].”

Ellis added that despite optimism that the captive

Read Full Article
Posted by Peter Dickinson at 11:51 AM