Strange to relate that on the 6th January we had the story below posted by New Scientist and today we have the fire in the chimp enclosure in Wellington Zoo. Happily it was an unventful incident but one from which both Wellington and all of us can learn. I often wish that there was some sort of 'fire door' to release animals. My stomach churns when I think of Zoo Fires. I know of several and all ended in tragedy. There should/must be some sort of fire risk

assessment done on all zoo buildings and enclosures. It is all very well hanging up fire extinguishers and notices on what to do but can the animals reach them? Or read? What happens in the wee small hours? Is there an alarm fitted? Does your zoo have a night watchman? Food for thought! - Peter 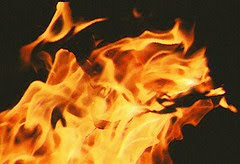 Chimps have been reported dancing in rainstorms – and now it seems our closest relation has a "fire dance", too. A dominant male chimp performed such a dance in the face of a raging savannah fire in Senegal.

Anthropologist Jill Pruetz of Iowa State University in Ames recounts that the male faced the fire with "a really exaggerated slow-motion display" before redirecting his display at chimps sheltering in a nearby baobab tree. Barking vocalisations from the male, never heard in more than 2000 hours of monitoring the group, were also heard.

Pruetz and co-author Thomas LaDuke at the East Stroudsburg University of Pennsylvania suggest that the chimps were cognisant enough to predict the fire's movement, retreating short distances at a time while staying calm. Other animals, in contrast, panic when fire approaches.

"If chimps with their small brain size can conceptually deal with fire, then maybe we should rethink some of the

A fire at Wellington Zoo's chimp cave started after the heating was turned on to warm up the chilly primates.


The blaze, at noon yesterday, was thought to have started from an electrical fault in one of the cave's heating pads – turned on so the chimps could ward off Wellington's cold summer weather.

Zoo spokesman Matt Kennard said all 11 chimpanzees were in the enclosure when the fire started but none were injured.

"They quickly moved away through natural instinct when they smelled the smoke."

The fire service attended the blaze, which was put out within

A MUST FOR ALL ZOOS - Fire safety risk assessment: animal premises and stables: Animal Premises and Stables

Posted by Peter Dickinson at 8:14 PM