Floods free hippo from Montenegrin zoo, shocking villages by strolling past their homes


A hippo escaped from a flooded private zoo in Montenegro Tuesday, shocking villagers who found her strolling near their homes. 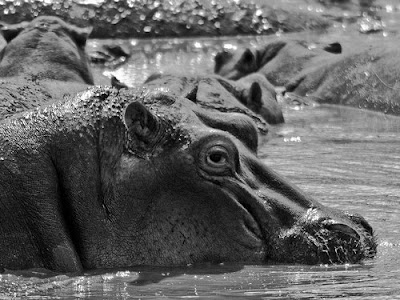 
Nikica escaped as heavy rains sent water flooding through the zoo, raising the water level in her pen and allowing her to swim over the top of the cage surrounding it.

The 11-year-old hippo made her way to the nearby hamlet of Plavnica, where she was still walking around Tuesday afternoon.

"When I got out from my house to feed my cow, I saw a hippo standing in front of the stall," said villager Nikola Radovic. "I thought I was going mad."

Zoo owner Dragan Pejovic said he will have to wait until the water levels drops before he attempts to recapture the hippo.

"Of course, we will not be able to bring her back until the water recedes," he said. Although hippos are known as one of the most dangerous animals in Africa, he said that "there is no reason for panic."

"Our hippo is a peaceful and tame animal," Pejovic said, adding that she had lived