Lucky Money for the Year of the Tiger

Economists describe stock markets as being bullish or bearish. Perhaps there is a third way of thinking about the recovering economy: friendly tigerish. 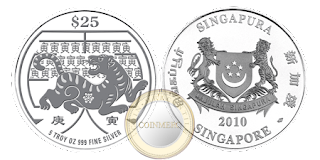 In 1998 and 1986, the two previous Tiger years of the Chinese lunar calendar, the mint's souvenir coins featured the creature looking predatory.

The mint director, Yip Pak Ling, 47, says of the change: “Traditionally, tigers are depicted as fierce creatures and we are mindful that since we are emerging from a recession, people might not like it if we used these usual images.”

According to Chinese belief, tigers, especially those that appear destructive, are considered inauspicious and should not be allowed into the home.


The solution? Use pictures of a family or cluster of tigers. “As tigers are also known for their great leap, these coins symbolize the whole family leaping forward harmoniously and leaving their problems behind,” he adds.

The artist tasked to achieve this vision was local painter Tan Seng Yong, 67, whose works are featured in the flower-shaped ingot that forms part of the coin collection, as well as on lunar collectibles such as a tiger puzzle medallion set.

This is the third consecutive Tiger year that he has collaborated with the Singapore Mint.

Mr Yip says: “We chose Tan again because when it comes to painting tigers, he is the best in the region.”

Indeed, Tan is known as the 'Tiger Painter', a nickname he earned in Chinese art circles as a result of a decision he made in 1974 to draw only this animal.

“Before 1974, I had done paintings of scenery and other animals, such as peacocks and horses, but so have many other artists. To stand out, I need to be different,” says the retired art teacher, whose works are among the exhibits on display at the Majestic Tiger Lunar Fair.

The event, organized by the Singapore Mint, is on at Suntec City Mall.

So why tigers? “I like the animal because it is majestic,” he says.

To make sure his paintings of tigers are as life-like and vivid as possible, he spends hours in the zoo taking photographs and drawing numerous sketches before setting to work on a piece of wall-mounted rice paper.

He has visited zoos in Singapore, Thailand, Taiwan and China to observe various species of the animal.

“Tigers in South-east Asia have more expressions. Those in China are usually bigger and more languid in their movements,” he says.

“In the past, I've focused on capturing the ferociousness of the
Full Story
Posted by Peter Dickinson at 10:05 AM

Email ThisBlogThis!Share to TwitterShare to FacebookShare to Pinterest
Labels: Singapore, tiger, year of the tiger