A captive Bornean orangutan has been seen acting as a peacemaker, breaking up fights between other warring apes. 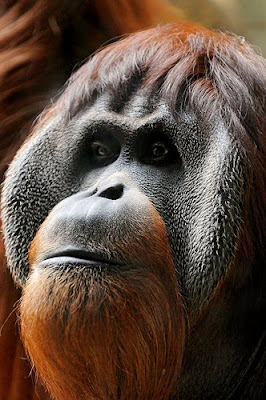 It is the first time that an orangutan has been seen behaving in this way, say scientists who published details in the journal Primates.

Peacemakers likely intervene in squabbles to ensure they do not spiral out of control.

That in turn stops violence affecting other apes in the group and helps the animals live harmoniously together.

"Orangutans spend most of their time alone in the wild," says Dr Tomoyuki Tajima of Kyoto University in Japan, who recorded the behaviour along with colleague Mr Hidetoshi Kurotori, a keeper at the Tama Zoological Park in Tokyo.


"However, they sometimes come and travel together, so researchers regard them as semi-solitary."

Yet in captivity, orangutans socially interact far more often, sometimes becoming aggressive toward one other.

So Tajima is studying how the apes cope with this novel situation.

He was surprised by what he found.

"Orangutans can actively preserve peace in a captive group," he told BBC News.

During this time, one of the juveniles, a six-year-old female named Kiki, was introduced to the group.

Over 13 days of observations, another much older female called Chappy, thought to be 34 years old, became repeatedly aggressive toward Kiki, either chasing or physically attacking her on 28 separate occasions.

During 19 of these interactions, another

Read Full Article
Posted by Peter Dickinson at 9:16 AM