Whatever your opinion of Shaun Ellis (and I have heard some odd comments) this book must make an interesting read. I will certainly give it a go when I can find a few hours to spare. I admit to being a bit confused as the write up from the book (see below) mentions Dartmoor Wildlife Park. I didn't know he had worked there. I thought it was at Combe Martin Wildlife Park. That is not going to help with publicity for one, but it will for the other. - Peter 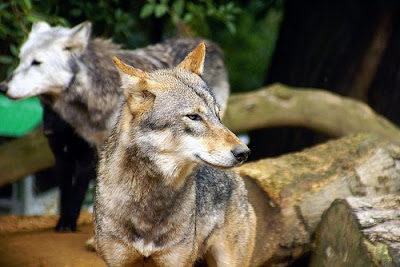 
My life as a wolf, by British naturalist who dared to infiltrate a pack in the wilderness


The huge wolf's fangs hovered over my neck. I was frozen to the spot, waiting for his jaw to clamp around my throat - and bring instant death.


It didn't happen. Instead, the young male with him gave me a gentler nip on my knee while the older male knocked me over. As I fell, I put a hand out to steady myself and found it resting on the pup's shoulder.

He didn't pull away. In that split second, I was overcome by an incredible surge of love for this creature and his family, and an overpowering need to be part of it.


I had been alone in the Rocky Mountains for ten months, searching for wolves to befriend. Being close to the creatures was not new to me. I'd infiltrated captive packs at Dartmoor Wildlife Park in England and at a wolf research centre in the American state of Idaho.


By staying with them in their enclosures, I learned about their body language, what their howls and whines meant, their smells and pack hierarchy. To become part of a wolf family, you must fit into their social order, rather than trying to rule it.

That means showing you come in peace by exposing your vulnerable throat area to them, as I had done with the big black male. Wolves have the power to kill but, unlike humans, they only use it when they must.

In Idaho, I also added scientific knowledge to my theories, working with biologists and studying wolf behaviour and communication.

Levi Holt, a native American who ran the centre there, believed wild wolves had moved into the area using old corridors between Idaho and Canada, living alongside animals bred in captivity but later released. I wanted to see if I could be accepted by a pack that had never seen a human.

The biologists at the research centre were against me going into the rugged, unforgiving landscape. To them I was a maverick from a foreign country with no qualifications. If the cold or wolves didn't kill me, a bear would. Despite this, I didn't take a gun, radio, sleeping bag or any shelter. I wanted to be like a lone wolf.

I had the SAS training I received during my seven years in the British Army and one 'get out of jail free' card: a rendezvous point agreed with Levi. If I wanted to get out, I was to wait there.

I never anticipated how long I would be gone, since at the time I was single, although I had a daughter from a previous relationship. Levi and I arranged that I would leave notes for him at the rendezvous point to let him know I was safe and well.

I set off on a bright autumn day, when the Rockies reminded me of my childhood in rural Norfolk, although the colours were intense: deep rich reds, oranges and gold lighting the forests.

I was in shock for the first few weeks, so frightened of predators I didn't dare move after dark. For the first four nights I slept in a tree. Only after I fell out did I start sleeping on the ground.

Gradually I became more confident and began to venture out by day, making rudimentary snare traps and catching my first rabbit before my rations of beef jerky ran out.

I was eating a diet, like the wolf's: one meal of raw meat gave me enough slow-release energy to keep going for up to two days. I would supplement it with nuts and berries and always tested it to avoid being poisoned.


As the weeks went by I established a routine and found a sheltered spot where I felt comfortable. Then I experienced my first reality check. For four days a storm raged around me. I became bored and depressed, but then the Army training kicked in and I remembered what I'd been taught about how vital it is to keep thinking positively.

It was four months before I saw my first wolf. I was walking down a track when a big black one crossed my path 150 yards ahead. It stopped fleetingly and looked straight at me with piercing yellow eyes before disappearinginto the forest.

I also established a new resting place where I felt safe, some miles from the track where I saw the wolf. It was in a clearing, with a big rock behind me and a good view of the area in front of me. Although I never allowed myself the luxury of sleeping for hours at a stretch, I could doze in short bursts.

There were more sightings of the wolf over the coming months, and others joined him, each time coming closer, nipping and sniffing me. At times we exchanged howls. There were originally five in the pack: the dominant female, two older males, a younger male and a young female, the latter two being siblings.

After one of the older males went missing, I decided to try to infiltrate the pack, following them clumsily on all fours. But where the others were welcoming, the dominant female was hostile, growling to warn me away. She bared her teeth and let out low barking noises before disappearing into the forest with the young pups. The others followed.

A week-and-a-half later I was sitting on a rock when the big male and the pups came towards me. The female stayed back and I respected her distance. And so it went on for two weeks, if not a month.

I continued to interact with the other three members of the pack, however, and the bond with them quietly intensified. In some ways, they were like captive wolves I had known. The language they used was similar but these wolves were stronger and alert to every sound and scent.

They played as hard and roughly with me as they did with each other. My all-in-one jumpsuit was quilted but it didn't protect me from the bone-crushing strength of their jaws. I was covered in cuts and bruises.

Early one morning I was in a clearing when the four of them appeared after a long absence. As usual, I lowered my body as they came towards me, and this time even the female came to greet me.

Suddenly, the big male barged at me and I crumpled to the ground under his weight. Before I realised what was happening the female was snarling and growling three inches from my face


I could feel the warmth of her breath, her lips were lifted right back from her teeth. I lay there helpless: I had no choice but to take whatever was coming to me. Those were the longest two or three minutes of my life - but she didn't harm a hair on my head. When she finally let me go she loped back to the others; my disciplining was over.


The incident didn't seem to change her attitude towards me but it radically changed my view. She could have killed me easily but had chosen not to. Now I thought of her as an intolerant aunt: knowledgeable, respected, but always bad-tempered. We would learn to live with each other.

Every night I battled with my better judgment over leaving the wolves. I had begun to feel safer with them than away from them, but I left them as darkness fell and returned by first light.

One evening tensions were low, they had all had a good feed and even Miss Grumpy seemed relaxed. I decided to stay.

I didn't sleep a wink, kept awake by fear and excitement, but they all slept soundly until morning. The male pup lay alongside me. I could hear his breathing and feel his every twitch. When morning broke I was walking on air because I knew I had been accepted.

In the early hours of the second day, they took off. I tried to follow, but as soon as we were among trees they were invisible in the darkness and they were gone. Dejected, I went back to the clearing and waited.

Many weeks later they reappeared, the young female bringing me the leg of a red deer. After months of snared rabbits, it tasted fantastic, although raw. For the next few weeks, they would go hunting and leave me, but they would always bring me something.

By this time I had been in the wild for about 18 months, and winter was on its way again. That would make getting about more difficult, but would let me to follow the wolves at my own pace. At last I'd see where they went in their long absences.

The day they left, I followed. Their pace was slower