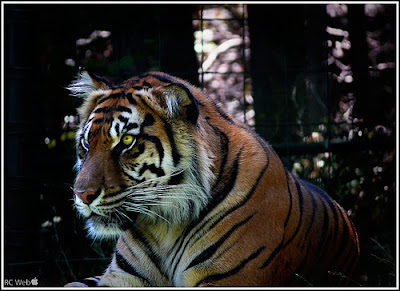 Norman Buwalda, a businessman from Southwold Township, near London, Ont., died Sunday at approximately 3 p.m. when he entered the cage to feed the tiger, one of many exotic animals on his property.

A male family member found Buwalda, 66, in the cage and separated the 650-pound animal by trapping it behind a set of glass doors that divides the cage. Reached Sunday at Buwalda's home, a family member said the family had no comment.

Police believe the tiger mauled a 10-year-old Toronto boy in June of 2004, igniting a heated discussion in Southwold Township on whether exotic animals should be banned from the area.

"We believe it to be the same animal," said Const. Troy Carlson of the Ontario Provincial Police's Port Elgin detachment.

The boy and his family were visiting Buwalda's residence when Buwalda led the tiger out of the cage to allow the boy and his younger siblings to take photos of the animal. The tiger was on a leash but lunged forward, knocking its owner off balance.

No charges were laid in the incident. Residents were furious when the town lost a court case that would have seen Buwalda's exotic animals banned.

The tiger is still in its enclosure on the property. Carlson said police believe Buwalda kept the animals there legally but an investigation is ongoing.

"As far as what's being done with the animal, at this point it's up to the family," said Carlson.

A post-mortem is scheduled for Monday, police said.

Neighbours paint a picture of an introverted man who cared for his tigers, lions and panthers as though they were his friends.

David Rawson, whose property touches Buwalda's, said his neighbour kept exotic pets as a hobby. He cared for many large cats in the 12 years Rawson lived in the area, whose growls were audible at night from Rawson's land. He usually kept two or three at a time.

Rawson said the cage in which Buwalda kept the tiger was of "zoo quality" and he had no safety concerns as long as the animals were kept in their pens. The two-storey cage, made of concrete, glass and steel bars, is as big as a house, he said.

The rest of Buwalda's land was not fenced in, although Carlson said there was a fenced in area on the land where Buwalda

Read Full Story
Posted by Peter Dickinson at 9:30 AM