Status of Elephants in Thailand

The other day I posted up a short piece on a Tightrope Walking Elephant at Safari World in Bangkok. Today it is the status of wild elephants I draw your attention. Taken from an excellent article in Today's Bangkok Post: 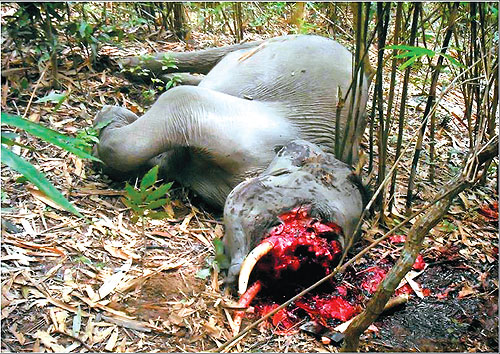 FALLEN GIANT: This male elephant was killed by poachers who were then surprised by rangers in Kui Buri National Park. PHOTO: DEPARTMENT OF NATIONAL PARKS, WILDLIFE AND PLANT CONSERVATION

Late last month a male elephant was shot dead in Kui Buri National Park in Prachuab Khiri Khan province. The poachers chopped the elephant's face and trunk to pieces in an attempt to remove his tusks. They failed, however, because park rangers arrived at the scene soon after hearing the gun blast and arrested one suspect. It is believed that the poaching incident was ordered by another party.


A month earlier in nearby Keang Krachan National Park in Petchaburi province, another bull elephant was shot dead and similarly mutilated. The poachers were successful in removing the valuable tusks.

Two years ago a similar incident sparked a conflict between conservationists and park officials when a male elephant in Tap Lan National Park in Prachin Buri and Nakhon Ratchasima provinces was killed and its tusks were removed and allegedly sent to an ''influential'' Bangkokian. Some witnesses claim that park workers and even a local monk took part in the slaughter.

Since wild elephants live in the deep forest it is hard to quantify the actual number lost in such criminal acts, which are publicly reported only when the carcasses are discovered by villagers or forest rangers. The three incidents above took place inside national parks which are monitored by wildlife rangers. It's not known how frequently such scenes are played out in unmonitored forests, along the nation's borders, or inside neighbouring countries.

What is known is that Asian elephants are becoming a seriously endangered species in environments where the mighty beasts were once plentiful.

Sompoad Srikosamatara, an assistant professor at Mahidol University who has studied Asian elephants and the ivory trade, said that in Thailand there are an estimated 1,600 elephants left, and in Laos, Cambodia and Vietnam their number has decrease to around 1,500. He said that 53 elephants were known to have been killed in Thailand in the wild from 1992 to 1997, 24 for their tusks.

The wildlife scientist said some of the park's jumbos had been poisoned to death to keep them out of pineapple farms surrounding the park.

''Four were killed in 1997 and 1998 when the price of pineapples was high. Another two were killed in 2003 and one in 2008,'' she said, adding that those killed were females and males without tusks.


***
For Books on Zoo Management and more please visit
The Zoo Professionals Book Store
***
For regular updated Zoo News, Views, Reviews and Vacancies please visit
Zoo News Digest on
FACEBOOK
Learn More About Zoos and Aquariums by visiting
The Zoo Hubs
and subscribe to the largest and longest established zoo related ezine
by clicking
HERE
Photo by: http://www.flickr.com/photos/noidentity/2892714365/
To advertise on Zoo News Digest please click
HERE
Posted by Peter Dickinson at 8:53 AM