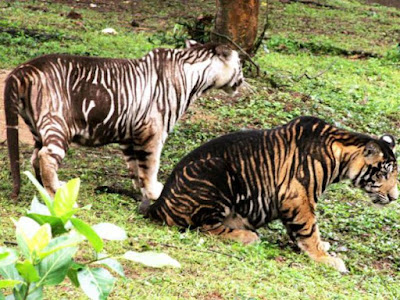 After waiting a year the Tigers have been released onto public view for the first time.

http://www.thehindu.com/news/national/other-states/nandankanan-zoo-unveils-its-rare-melanistic-tigers/article7475342.ece
Posted by Peter Dickinson at 11:15 AM No comments: 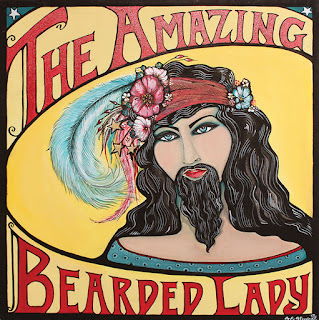 I don't like zoos exhibiting freaks. They make me ashamed of parts of the industry in which I love and work. Zoos are about conservation breeding and education they are not some 18th Century sideshow where the Bearded Lady and the Dog Faced Man sit alongside the Six Legged Sheep and Three Eyed Goat.

People don't like me using the word 'Freak' so it is worth dealing with that definition first:

Wikipedia - "Freak" continues to be used to describe genetic mutations in plants and animals, i.e. "freaks of nature."

The Free Dictionary -  An abnormally formed organism, especially one regarded as a curiosity.

Oxford Dictionary - A person, animal, or plant with an unusual physical abnormality

So my use of the word in connection with White Tigers, White Lions, White Alligators, Two Headed Snakes and Turtles is entirely correct.

There is no question about it...All of such "abnormally formed organisms" can, will and do occur in nature. That is nature. The vast majority of such physically disadvantages creatures are unlikely to survive too long. If they live to old age in the wild then I for one would be both happy and just a bit amazed.

Such freaks also occur in captivity and I have no problem with that if they are naturally occurring. Let them live, let them play a part in education. Their quality of life needs to be seriously assessed however and euthanasia must be an option. Keeping physically disadvantaged animals alive and on show just to get people in through the gate can be both cruel and wrong..

Claims that such creatures will be raising money for 'conservation' should be given serious investigation.....does even one cent actually ever go to conservation?

Where things go really wrong in my world is when 'freaks' are deliberately bred with other freaks or closely related animals to produce yet more freaks. This is clearly the case with White Tigers and Lions and other freak mutations. These animals are conservationally useless. What these Dysfunctional Zoos are doing is very very wrong. All they are concerned about is getting more money in their coffers regardless of whatever argument they put forward to justify their sins.

Then there are the collections which go out of their way to purchase freaks to put on display. Such collections, to me, instantly slot themselves into the Dysfunctional Zoo category. One wonders just what they are going to come up with next? The bearded lady?

Posted by Peter Dickinson at 11:27 AM No comments: 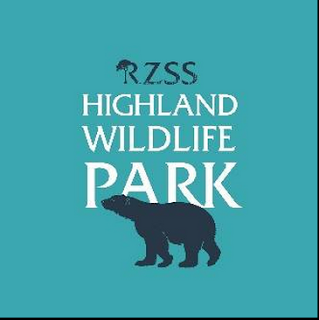 RZSS Highland Wildlife Park is pleased to welcome three young Scottish wildcat kittens to the Park. Also known as the Highland Tiger, this incredibly rare, native species is facing the very real threat of extinction due to hybridisation with domestic and feral cats, habitat loss and accidental persecution. However, with coordinated conservation efforts and a new conservation breeding programme for eventual release now established, the future for the species is looking much brighter.

The three young kittens were born at the end of April, but spent the first couple of months safely tucked away in their den with their mother Betidh, only recently starting to wander out and explore their territory. This year’s births add to a long line of successful breeding at RZSS Highland Wildlife Park, which has been instrumental in maintaining a healthy captive population which acts as a safety net for the species.

The Royal Zoological Society of Scotland, along with more than 20 other organisations, is involved in the Scottish Wildcat Action, a partnership project – supported by Scottish Government and the Heritage Lottery Fund – which represents the best chance the wildcat has of surviving in the long term. The project includes many of Scotland’s leading conservationists, working together with local people to save the Scottish wildcat. The Priority Areas Team, which is part of the project, is working hard to reduce the threats that wildcats face in the wild, which includes extensive neutering of feral and poor hybrid cats to prevent further hybridisation, whilst the Royal Zoological Society is undertaking a new conservation breeding programme to build up a robust and sustainable population for future release. 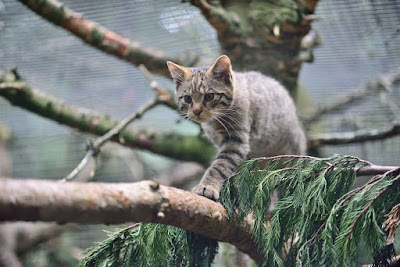 David Barclay, RZSS Cat Conservation Project Officer commented on the recent arrivals: “Without Scottish Wildcat Action the future of the Scottish wildcat is bleak. The team is working hard all over Scotland to ensure measures are put in place to reduce threats, raise awareness and protect the remaining wild population. With such a small and declining population another important element to our action plan is establishing a new conservation breeding programme to increase numbers for future re-introductions. The high standards of husbandry and breeding success from animal keepers at RZSS Highland Wildlife Park are an asset to the breeding programme, and important genes from these new arrivals may one day be represented in released cats roaming the wilds of Scotland.”

Although some similarities with domestic tabby cats exist, the two species are not to be confused. With their big, bushy, black-ringed tail and tenacious behaviour it is no surprise that the Scottish wildcat was used historically in many Highland clan crests. The Scottish wildcat is an incredibly rare and elusive creature, thought to be critically endangered, it is clear there is an immediate need for effective conservation measures across the whole of Scotland. All of the different wildcat species across the world are endangered for similar reasons, however the Scottish wildcat is one of the rarest cats in the world and is probably the nearest to extinction.

The Scottish wildcat is the same subspecies of wildcat as is found in continental Europe, but has been separated from them since the end of the last ice age, over 8000 years ago. Domestic cats originate from Near Eastern (African) wildcats and have been through a process of domestication. Hence they have a quite separate evolutionary history to Scottish wildcats and behave quite differently. Wildcats prefer to live alone but will come together for a short period for breeding, normally then giving birth to around two to three kittens, which the mother will protect fiercely.

Posted by Peter Dickinson at 1:55 PM No comments: 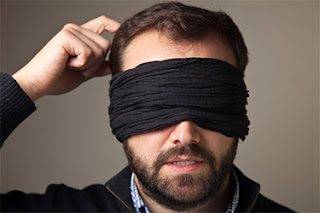 With the latest release from TripAdvisor, zoos and aquariums around the world or their local newspapers are shouting out that they are this, that or the next position. TripAdvisor do get it right occasionally but these ratings are not gauged by their peers but by Joe and Jane Public who have an entirely different idea of what makes a good zoo.

Even within the zoo world opinions differ and my opinion is probably not shared by everybody. No matter....it is MY opinion. Personally I would not like any zoo that I worked in to be included in the same list as a collection that is way way down of what I consider is a good zoo. What would really rub salt into the wound would be if my zoo was further down the list than the zoo which offended my personal criteria.

Before I name the collection my opinion in no way reflects the staff working there who I am sure are caring and dedicated professionals. Even the worst zoo has such staff. They stay because they care, they love their work and the animals and, regrettably sometimes because they know no better.

The zoo I would not like to see on the list is number 9, The Zoological Wildlife Foundation. Why? Because it carries out so many activities that I believe should not take place in a Good Zoo.

I am against the breeding or keeping of white lions or color morphs of big cats. I am against the public posing with big cat cubs or walking in with big cats on chains. I am against anybody posing with primates with perhaps the exception of some Lemurs. Cubs and young primates should be with their mothers....and if not then their husbandry needs a serious review. Breeding or keeping Tiligers is so very wrong as is having any dealings with places who deliberately breed such creatures. Primates dressed in clothes...so wrong. I could go on but you can visit their website yourself. Again remember, this is MY opinion but I would not include this place in my top 100.

You can learn a bit more below...which did not come from their website:

Posted by Peter Dickinson at 6:05 PM No comments:

Topics will include:
Effects of carcass feeding on carnivore behaviour
Paddock management in relation to ungulate nutrition
Wasting syndromes across a range of species
The benefits of fruit-free diets for primates
A One Health perspective of the role of microbes in nutrition
The role of Vitamin D in mammal diets
Applied nutrition workshops
Discussion panel

For more information or to register please go to our website:
www.marwell.org.uk/zoo/tickets-experiences/mammal-nutrition-seminar

Supported by: University of Surrey
Posted by Peter Dickinson at 2:05 PM No comments: