Who would you vote for? 2016 Indianapolis Prize

Who would you vote for? 2016 Indianapolis Prize

Posted by Peter Dickinson at 10:56 AM No comments:

What do a conservation charity, ex banker and a cartoonist have in common? 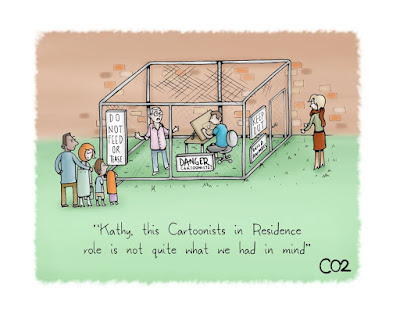 What do a conservation charity, ex banker and a cartoonist have in common?

RZSS appoints a Cartoonist in Residence to their flourishing Residency Programme

The Royal Zoological Society of Scotland has appointed Dr Cameron McPhail and his Kartoon Faktory as RZSS Cartoonists in Residence.

Dr McPhail is a former banker turned writer and cartoonist. After stints in academia and Scottish Enterprise, he joined the Royal Bank of Scotland and rose to be Chief Executive of Wealth Management, before leaving to pursue a career in writing and cartooning. He and his talented team at the Kartoon Faktory (based in Jersey) create unique cartoons and memorabilia based on political and social satire.

Kathy Sorley, RZSS Thinker in Residence and Manager of the RZSS Residency Programme, said: “The RZSS Residency Programme allows collaboration with a number of experts in their fields, enabling RZSS to engage with many different audiences about the conservation work we undertake at home in Scotland and elsewhere around the globe. To date over a dozen Residents have been appointed, including a Sculptor, Beekeeper, Environmental Scientist, Storyteller, Silversmith, Wildlife Artist, Nature Photographer, Palaeontologist, Adventurer/Explorer and an Organic Chef.

“Humour is a brilliant avenue to bring topical issues to people’s attention, and to pique their curiosity about conservation matters we care deeply about through clever use of wry and insightful cartoons, which Dr McPhail creates in abundance. We are delighted he and his illustration team at the Kartoon Faktory have agreed to become our RZSS Cartoonists in Residence.”

The first two cartoons in a unique series for the conservation charity, one celebrates the latest batch of meerkat pups at RZSS Edinburgh Zoo’s Meerkat Plaza, whilst the second features Dr McPhail and illustrator Oli Nightingale getting an authentic ‘behind the scenes’ look at life in the Zoo.

Upon receiving his appointment Dr McPhail commented, “This is a wonderful time to be associated with RZSS Edinburgh Zoo and RZSS Highland Wildlife Park, and given the wealth of subject material we are bound to have a lot of fun during our Residency.”

The Cartoonist in Residence allows the promotion of the Royal Zoological Society of Scotland through humour and illustration, and will help to raise awareness of the mission of RZSS to connect people with nature and safeguard species from extinction. In the future it is hoped that RZSS will offer visitors the chance to watch the Kartoon Faktory at work both at RZSS Edinburgh Zoo and RZSS Highland Wildlife Park and that ultimately signed, limited edition prints will be developed for our shops. Long term goals also include cartoon books based on the animals at both visitor attractions, speeded-up footage of illustrations being created at both parks, and possibly even RZSS’s own cartoon strip!
Posted by Peter Dickinson at 12:01 AM No comments: