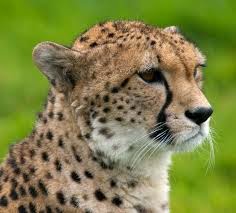 New Study Links Neurological Disorders in Captive Felids
to Improper Diet
OTJIWARONGO, Namibia (30 Dec, 2014) – Findings from a recently published research study confirm what many scientists have long suspected. A high incidence of neurological disorders among captive felids in the United Arab Emirates (UAE), including demyelination of the spinal cord, correlates to copper and Vitamin A deficiencies, which is attributable to meat diets not properly supplemented nor based on mixed, whole carcass prey. The study was conducted by the Central Veterinary Research Laboratory (CVRL) in Dubai, UAE, with collaboration from Cheetah Conservation Fund (CCF), Namibia; Institute of Animal Nutrition, Vetsuisse Faculty Zurich; and Centre for Applied Biotechnology and Molecular Medicine, University of Zurich.
The study compared blood and tissue samples among captive felids, including cheetahs, lions, and snow leopards, that were fed different diets. Thirty percent of the animals that did not receive supplements and existed primarily on a poultry muscle meat diet displayed clinical neurological signs such as ataxia, lack of coordination, swaying gait and moderate to severe hind limb weakness. Despite having normal appetites, these animals developed hind limb paresis and were eventually unable to stand. They either died or were euthanized, as damage is permanent and there is no treatment.
“The Role of Copper and Vitamin A Deficiencies Leading to Neurological Signs in Captive Cheetahs (Acinonyx jubatus) and Lions (Panthera leo) in the United Arab Emirates”, was published in Food and Nutrition Sciences (2014, 5, 1978-1990). Claudia Kaiser, DVM, of the CVRL and the Institute of Animal Nutrition, Vetsuisse Faculty Zurich, Zürich, Switzerland, is the study’s lead author. Dr. Kaiser worked with the CVRL from 2012 to 2013 and completed the study as her Doctoral thesis from Zurich University under the supervision of Prof. Annette Liesegang.
“We did this study because of all the post mortem findings of the previous years at the CVRL. Due to the fact that there was demyelinisation of the CNS in a lot of felids that were ataxic before euthanasia or natural death, we wanted to know if there was a correlation between the symptom and their nutrition. The results showed us that a supplemented diet is one of the key factors of keeping wild animals healthy in captivity”, said Dr. Kaiser. “Captive animals cannot care for themselves, so it is our responsibility to optimise their lives in captivity”.
According to Dr. Laurie Marker, Founder and Executive Director of CCF and one of the study’s co-authors, cheetah myelopathy is the term used to describe ataxia, hind limb paralysis and pareses caused by degenerative lesions on the spinal cord. It’s been found historically among some cheetahs kept in zoos, wildlife parks and private collections, but is now being reported with alarming frequency in the United Arab Emirates, where cheetahs are popularly kept as exotic pets, most often where the cheetahs were illegally catured in the wild. Cheetah myelopathy can lead to vision loss, muscle weakness, stiffness, spasms, loss of coordination, loss of sensation, pain, and changes in bladder and bowel function. The majority of these cases are fatal.
“Many Emirates view cheetahs and other large felids as status symbols, but are often unfamiliar with the animal’s proper care or diet. Big cats need the vitamins, minerals and trace elements found in bones, viscera, fur and feathers to remain healthy”, said Dr. Marker. “Unfortunately, many cheetahs kept as pets are not fed whole carcasses with appropriate supplements, nor are they provided with the correct supplements to balance their diet. As a result, they experience debilitating health problems, and many will die prematurely”.
With fewer than 10,000 wild cheetahs remaining and 50 to 70 percent of poached cubs dying en route to the Arabian Peninsula, there is little doubt the illegal trade in cheetahs is taking an already endangered species closer to the brink of extinction. “More education is needed to reduce the demand for cheetahs as exotic pets. If these wealthy exotic animal owners truly care about their animals, they would use their resources to educate others and help protect these majestic creatures where they belong, in the wild”, added Dr. Marker.
Posted by Peter Dickinson at 3:08 AM No comments: 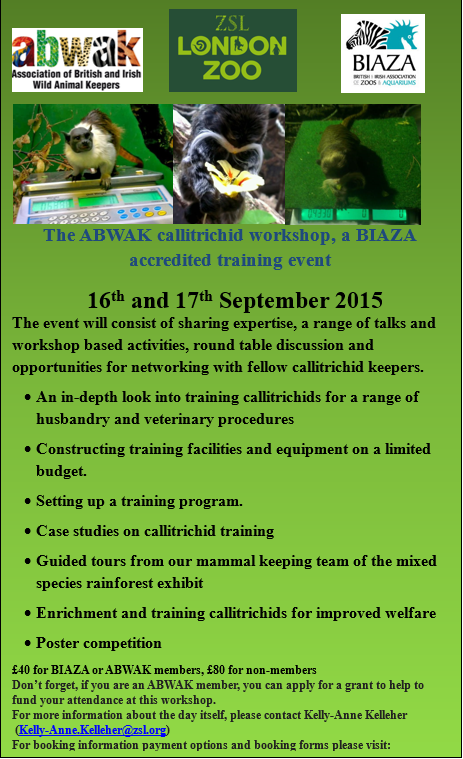 Posted by Peter Dickinson at 5:14 PM No comments: 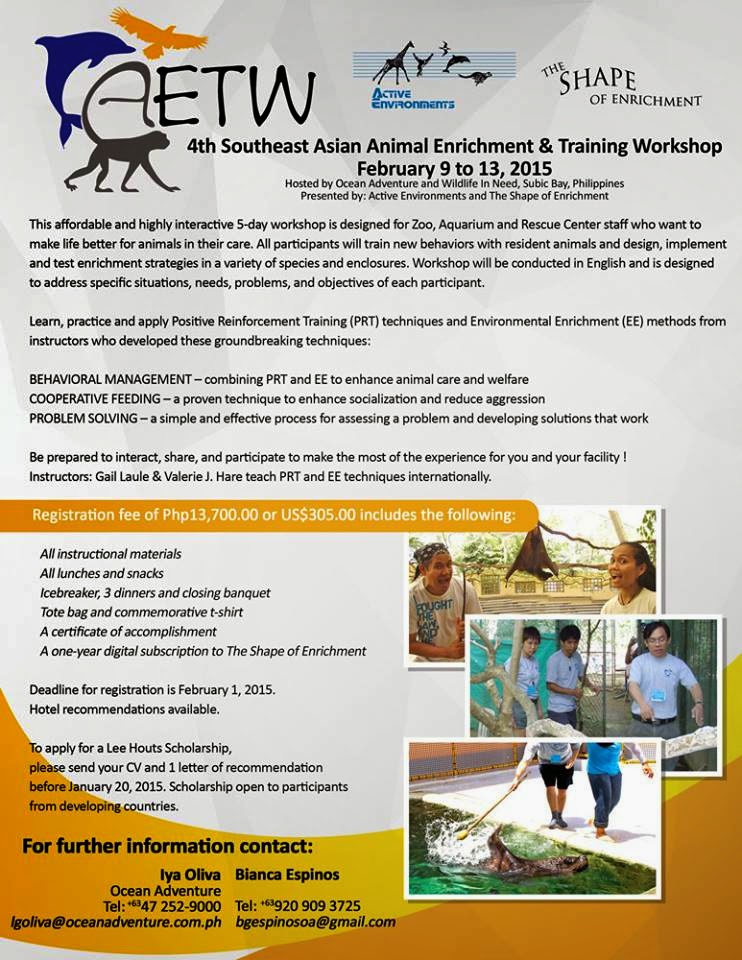 Posted by Peter Dickinson at 4:02 AM No comments: 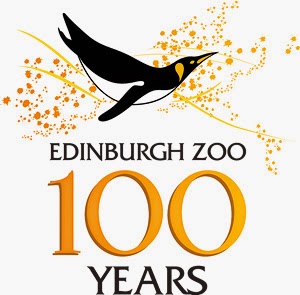 Edinburgh Zoo’s giant panda Yang Guang and his keeper Michael Livingstone have both been nominated for top prizes at the third annual Giant Panda Zoo Awards, the Oscars of the panda world.

Panda fans and experts from around the world are invited to vote for their favourites after nominees were announced this morning (12 December 2014). Voting has now opened and will close on 18 January 2015. The Gold, Bronze and Silver winners will be announced at an award ceremony on 23 January 2015.

Michael Livingstone, giant panda and carnivore keeper at Edinburgh Zoo, said:
“We are honoured to be nominated for two Giant Panda Zoo Awards this year. Not only do they highlight and reward organisations involved in panda conservation, but are a unique tool to educate the public on the issues faced by the giant panda and inspire people to discover what can be done to help.

“I was overwhelmed when I first found out that I had been nominated, and a little shocked as it was completely out of the blue! I’m definitely in good company as Yang Guang has also been nominated this year for the ‘Favourite Panda Outside of China’ award. We’ve had success in this category before as Yang Guang actually won the silver prize in the inaugural year of the awards, then the following yearour female panda Tian Tian won Gold!”

Michael, aged 26, has been a zoo keeper at Edinburgh Zoo since the summer of 2009. He started as a temporary hoofstock keeper, before landing a permanent role in the carnivore department. Michael has the honour of being one of the select group of dedicated panda keepers that have looked after Yang Guang and Tian Tian since they arrived at Edinburgh Zoo in December 2011.

Alongside the day-to-day care of the two pandas, Michael is involved in the panda breeding programme for which he regularly collects samples from both pandas and monitors their behaviour. In April, Michael was present at the artificial insemination of Tian Tian. Here he was on hand to help prepare the surgical room and assist with the dedicated care of both pandas. Michael continued to work round the clock during Tian Tian’s pregnancy as he collected crucial samples from her at various points of the day and throughout the night - these were used to track and monitor the stages of Tian Tian’s pregnancy. In the latter stages of pregnancy, Michael was one of the panda experts who took it in shifts to watch Tian Tian 24 hours a day through CCTV. In July this year, Michael also visited the Bifengxia panda base where he spent time with Chinese colleagues learning about pregnant pandas, pandas in labour and newborn cubs.

The Giant Panda Zoo Awards were created to promote panda conservation, education and research activities on website www.GiantPandaZoo.com. The site focuses on spreading the word about giant panda conservation and providing the latest news on the world’s panda population.

Visit www.GiantPandaZoo.com to vote.
Posted by Peter Dickinson at 2:17 PM No comments: