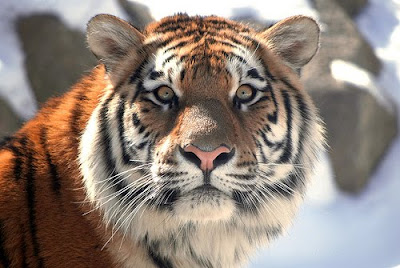 Photo by: http://www.flickr.com/photos/fpat/3410439596/
February 14th 2010 saw the start of the Chinese "Year of the Tiger". The thing is, it isn't. It will never be the Year of the Tiger until we have adequate room and protection for them in the wild and a real understanding of the problems they face in captivity.


There will be those who recently read and were assured that there are 6000 tigers in captivity in China. That is nearly double the entire wild population! Couple that to the 3000 or so Tigers held in private hands in Texas alone it really looks like the tiger has nothing to worry about. There are Tigers elsewhere too. It isn't just Texas in the USA as it is estimated there may be as many as 5000 'American' Tigers. Every other country has its quota too. Europe, South America, Asia, Australasia and the Middle East, they all have Tigers. There are lots and lots of Tigers.

Today there remains only around 3200 Tigers in the wild shared out in varying numbers between Malaysia, Bangladesh, Bhutan, China, India, Indonesia, Nepal, Russia, Thailand, Laos, Vietnam, and Cambodia.

Within the reputable, the good zoos of the world, there are genuine sincere efforts to keep these subspecies separate. Each has its own studbook and the available gene pool is managed by genuine caring professionals with the long term future of that species or subspecies in mind. Nobody is kidding themselves that any but a small number will ever be released into the wild, if at all, whilst the problems in the wild still exist. The zoos today are looking as far as a hundred years ahead to a period in which we presently cannot predict the state of the planet.

The subspecies held in captivity are instantly recognised as Tigers even to the novice eye. Put them into adjoining enclosures and the subspecific differences become apparent. These are animals which have been shaped by nature over many thousands of years. Time has weeded out the weak features. These are animals which have been naturally selected by nature to survive in their environment. At one extreme we have the small dark short haired Sumatran Tiger Panthera tigris sumatrae ideally suited to the dark tropical humid forests of Sumatra. At the other we have the large, light coloured and long haired Amur Tiger Panthera tigris altaica which is adapted to the snowy wastes of Eastern Russia. They are what they are because of natural selection.

Within the managed captive Tiger populations no money changes hands. Tigers are moved between collections for the consideration and well being of the population as a whole. Breeding pairs are carefully selected. An unnatural selection done with an understanding of natures choice. Breeding is limited with the health and well being of both animal and population being important. Parent rearing is one of the main considerations.

Outside of the worlds reputable zoos we have the bad zoos and Tiger farms which give no consideration to subspecies of tigers, or any other animals for that matter. All they are really concerned about is having a tiger or tigers. They breed brother to sister to mother to son. They give no care to crossing a Bengal Tiger Panthera tigris tigris with whatever other subspecies may be to hand. No records are kept. The more cubs they can produce the happier they are. Nobody knows or cares in such collections. Yet these places have the audacity to excuse their crimes and talk about conservation and re-introduction programmes whilst they have not the faintest idea about either concept. What is really sad is that in some countries the officials in charge of the wildlife departments have no understanding either. There is a real danger that some of these animals may actually be released by people working along with the assumption that as it is striped, so is a Tiger, so it must be okay. It isn't.

Nobody in their right mind would release Polar Bears Ursus maritimus into jungles of Malaysia or Malaysian Sun Bears Helarctos malayanus into the Arctic wastes. It would be equally crazy to consider releasing hybrids of the two into either environment. They would be clearly unsuited. The example may sound a little extreme but it is not so very far removed what some of these disreputable collections are doing and talking about. They are even crossing Lions with Tigers (Ligers) and Tigers with Lions (Tigons). We have known that such hybrids could be bred in captivity for more than a hundred years. Just what are they trying to prove? Where on earth do they expect to release such animals?

There are those who argue that subspecific tiger crosses can introduce 'hybrid vigour' into a population. The fact that it has already been done in some cases by people of reputation does not make it right. It is just as easy to consider such an act as genetic pollution and as a dilution of needed physical attributes that nature has taken aeons to establish and hone. Tigers are not common peas Pisum sativum. This is not one of Mendel's experiments with plants. These are living breathing warm blooded mammals.

Then we have that group of zoos which continue to breed White Tigers. Undeniably beautiful but so often wrongly promoted as a rare endangered species which they most definitely are not. White Tigers are completely messed up genetically and most carry defects like cross eyes and similar. Then they go on to promote these as rare or endangered. This would be a bit of a joke if it were not in reality a blatant lie. There are probably as many White Tigers in captivity as there are wild normal coloured Tigers in the whole of India. To cap it all they are nearly all cross breeds between Bengal and Amur Tigers. These animals will never be released into the wild by any competent authority.

There is a place for a few White Tigers in captivity for, after all they did, very rarely occur in the wild within India. A genuine naturally produced White Tiger in the hands of a zoo which is actively involved in an approved and regulated breeding programme would be valuable not only genetically but as an educational tool. White tigers as they exist today are no more than a commercial draw to pull in the public. Any other colour would do to the disreputable zoo as long as it is not natural.

The real threat to the Tigers of the world is not just the problems they face in the wild (though these should not be dismissed because they are critically important) but from the huge unregistered, unmanaged, genetically damaged populations held in captivity in tiger farms and in second and third class zoos.

After more than 40 years working in private, commercial and National zoos in the capacity of keeper, head keeper and curator, Peter Dickinson started to travel. He sold house and all his possessions and hit the road. He has traveled extensively in Turkey, Southern India and much of South East Asia. In his travels he has visited over 200 zoos and writes about these in his blog http://zoonewsdigest.blogspot.com/ or on HubPages http://hubpages.com/profile/Peter+Dickinson Peter earns his living as an international independent zoo consultant, critic and writer.

Article Source: http://EzineArticles.com/?expert=Peter_Dickinson
Posted by Peter Dickinson at 10:16 AM