Specimens were released into the wild at Estación Santo Domingo in Paysandú on 30 September. This is the second time this initiative has been carried out. It is part of the forestry company’s commitment to maintaining biodiversity. 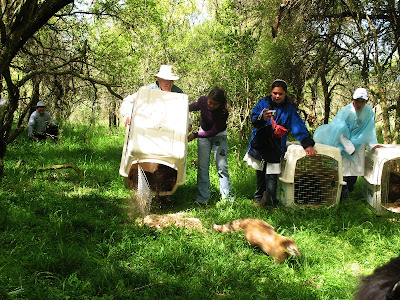 In the context of the International Year of Biodiversity, the Montes del Plata company, a joint venture between Stora Enso and Arauco in Uruguay, released 20 coatis into their natural habitat as a contribution to the help conserve the species.

The company, which manufactures cellulose pulp from wood, has a facility to breed and conserve species that are in danger of extinction in M`Bopicuá in the department of Río Negro. There, the coatis are raised and reproduced in captivity with the objective of reinserting them into their natural habitat.

The release of the coatis took place at Estación Santo Domingo in Paysandú. About 70 students from rural schools in Santa Kilda, Palmar de Quebracho, Araújo and Tres Bocas participated in the event. Prior to the release, the children listed to presentations about the International Year of Biodiversity and were asked to investigate how to associate the coatis to their environment in an effort to promote respect for the nearly extinct species and the conservation of fauna and flora.

Also in attendance were Dr. María de los Ángeles Berruti, Dr. Marcel Calvar and inspector Álvaro Bugarin of the Department of Fauna of the Natural Resource Bureau at the Ministry of Agriculture, and agronomist Daniel Jaso of the National System of Protected Areas (SNAP).

The Santo Domingo center is part of Montes del Plata’s assets. It has a large conservation area including wetlands (Santo Domingo wetlands) and Palmares de Yatay, a palm grove with 100 year-old trees.

The release of the coatis into the wild was included in the calendar of activities of the United Nations Environment Programme (UNEP) under the framework of the International Year of Biodiversity.

Naturalist Juan Villalba, an expert in fauna who heads the M`Bopicuá breeding and conservation station, gave a talk on biodiversity and the tasks that have been performed to recover the wetlands.

Montes del Plata promotes the responsible management of resources through the conservation of soil, water, air and biodiversity. The company manages two areas of high conservation value. Each has specific management plans, including actions such as the restoration of natural habitats and the monitoring of flora and fauna, as well as other areas that are representative of different ecosystems such as native woodlands, wetlands, rocky areas and natural pastures.

About coatis
Characteristics: Coatis have a dark grey to reddish-brown color along the spine and a yellowish abdomen. They have dark and light rings around the tail and a long and very flexible snout. They have very small eyes and ears. Their front limbs are shorter than the rear limbs and they have very strong claws. Adults can weigh up to 11.3 kg.
Behaviour: Coatis are active during the day and at twilight. They sleep in trees at night. Coatis are social. They live in large groups consisting of females and young males. Adult males are generally solitary. They live on land and in trees, inserting their snouts in holes or under bark (in search for food). They use their paws to capture food and hide it in holes in large trees.

Reproduction: At the end of the gestation period, pregnant females abandon the group and give birth in a nest built in a tree. Gestation lasts between 74 and 77 days. Litter size ranges between one and seven. At five days old, the newborns weigh 78 grams. They open their eyes on the first day and at 19 days old they begin to move about by themselves. The females return to the original group along with their young five to six weeks after giving birth. 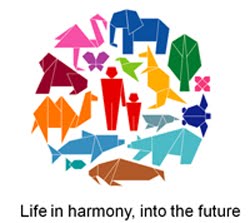 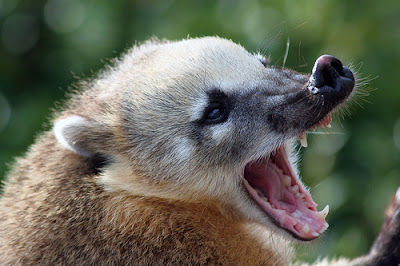 Photo by: http://www.flickr.com/photos/rednut/1417072939/
To advertise on Zoo News Digest please click
HERE
Posted by Peter Dickinson at 9:07 AM

Email ThisBlogThis!Share to TwitterShare to FacebookShare to Pinterest
Labels: Coati