A COLLABORATION FOR THE PRESERVATION OF PENGUINS 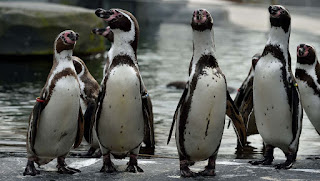 A COLLABORATION FOR THE PRESERVATION OF PENGUINS

Since last summer, the Paris Zoological Park has been participating in a scientific project on Humboldt penguins , in partnership with the Hubert Curien Pluridisciplinary Institute (IPHC) of the CNRS and the University of Strasbourg, and the Polar Department of the Scientific Center of Monaco.

This multidisciplinary project makes it possible to refine the techniques and perfect the procedures before going to apply them in the natural environment, in Antarctica, with the constant concern to develop new study methods making it possible to reduce or even eliminate any disturbance on the animals due to the study itself . Beyond this help, which allows to significantly shorten the development phases before going to apply them in extreme environments, it also turns out that studying our penguins makes it possible to answer certain targeted questions for which it is impossible to respond in a natural environment (lack of history on individuals, disappearances during studies, etc.)

A ROBOT AMONG PENGUINS

As already done in the natural environment by CNRS research teams, the approach of animals by a rolling robot makes it possible to have a reduced impact on the behavior of the colony .

At the Zoological Park, the project started its second study phase in January with the work of a Master 2 student for a period of 6 months, who will take care of this rolling robot “Rover”, but not only.

If this new step will allow the robot to try out different appearances in order to find the one that will allow you to go unnoticed within the colony , it will also be accompanied by other technological innovations, in particular for remote cardiac monitoring. animals without having to capture or stress them.

In addition, an automatic weighing platform will be set up. It will make it possible to obtain, record and transmit the weights of the penguins which will pass voluntarily over them. This information will provide the animal team with precise and constant monitoring of a very good health indicator, the weight of individuals, thanks to this autonomous system.

The animals will be identified automatically by two means: their chip and a camera linked to visual recognition software . Developed by the Scientific Center of Monaco, this technology, which uses powerful artificial intelligence algorithms, will thus be at the service of the health of our animals, while it will allow in Antarctica to better understand variations in weight over time. the life cycle of these extreme birds. Our visitors will be able to see this technology at work… and modestly keep the weight of our penguins to themselves!

Posted by Peter Dickinson at 9:34 AM

Email ThisBlogThis!Share to TwitterShare to FacebookShare to Pinterest
Labels: Penguin