Why we must save the Buenos Aires Zoo

Why we must save the Buenos Aires Zoo 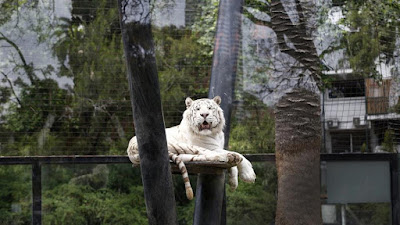 Translated from Spanish - Original below the English
https://www.informadorpublico.com/sociedad/por-que-tenemos-que-salvar-al-zoologico

"Animals, according to many traditions, were protected from the flood entering an Ark. Today, many animal species face another catastrophic flood, this time caused by humans. Around the world, the animals face bullets, poison, snares and traps. Some of the most iconic animals on this planet, like tigers, elephants and rhinos, are closer to extinction than of salvation ". Yury Fedotov, "The Wild Fauna today animals are being killed one by one, not saved from a twos", The Guardian, March 2, 2016.

Tirelessly, insidiously, perversely, the social-Darwinist engineers UN, through its many NGOs in Consultative Status and its laboratories of social experimentation, providing draft legislation to our legislators in Congress, legislatures and deliberative councils, give another step to dehumanize society seeking the destruction of values ​​and symbols of humanity, a condition needed for World Government or Global Governance.

Again, through emotional manipulation and deceit, in a typical "progressive" collectivist sociócratas political action, seek to disguise their true purpose through a call to the population to participate in this crime: the disappearance of the Zoo animals.

Its transformation It is intended in a "Ecopark" virtual and digital reality where not only kids can not marvel at the wonder of animal life around the globe seeing her in person a few meters, but those children will be "re - educated and formatted or molded "to dehumanize, to form a sociocratic world citizens" posthuman ".

Buenos Aires Zoo, founded by Sarmiento, is an institution that since 1875 has been educating children and adults about a country vital to the wildlife of the world human survival issue.

Zoo, generations of Argentines have been amazed and marvel at the wildlife species on display, many of which breed there and allow other zoos in the country and the world on supplies of animals for children elsewhere can understand the wonderful biological variety on the planet.

This Buenos Aires Zoo was born the first Asian elephant born in a zoo in the world.

No , "Ecopark" without animals, which wants to develop as the head of government there Larreta, can never show the children the wonderful dimension of Creation and its creatures.

The wonder of seeing an elephant moving a few meters or a lion or a giraffe is not replaced with any "virtual reality".

Given the arguments presented by political bolu-progressive, or evil-progressive sociocratic-collectivist and social Darwinists of CABA, regarding that animals have rights and that the Zoo live in appalling conditions, I affirm that the zoo animals have rights a good deal, good food and clean, but I say also that not only are not wild but were bred and born in captivity for education and ecological, environmental, biological, geographical and historical consciousness of youth and for the survival of species both their knowledge by new generations of humans who learn to love them as the need for genetic pools of these species outside their natural habitats, increasingly reduced the need for land for crops and livestock . These animals are descended mostly from others born in captivity for generations, and affirm that the unsanitary conditions and alleged neglect are not inherent in the concept of zoo as an institution but are caused by concessions to the incompetent or corrupt exploitation and not me explain how this administration Larreta and PRO did not act much earlier.

It is suspicious and I tend to think that was allowed to get to this point of abandonment mentioned in order to have an excuse or argument for nationalizing and to liquidate this historic and invaluable treasure of humanity, as the boys from schools and families who have visited for over a hundred years have gained global consciousness and as the dominant species of the richness of life that exists in our home, Earth, and have been inspired, informed and have learned to love these species, which they could never see in their natural habitat, except the privileged few who can travel.

Regarding allegations of suffering of animals in the zoo, it should be noted that if well managed, there live much longer lives and better health than their wild brethren and live in absolute safety, which does not occur in their natural environments.

For example, while it is the law of nature and of course there to protect natural ecosystems, the reality is that for example, animals in Africa suffering from internal parasites that destroy the organs, parasites external as ticks and diseases such as transmitted by the tsetse fly, suffer from hunger and thirst, accidents hunting, serious injury and even death in fights with other males and age, the devoured alive hyenas and wild dogs or a crocodile when approaching the river to drink, while animals in the zoo do not face these dangers. I mention this to show that Zoo animals do not suffer these evils, and are also wormed against internal and external parasites and given vitamins and minerals.

On the other hand, in their countries of origin, except in cases where sport hunting, as there is an economic interest, protects and guarantees the survival of the species in very controlled reserves or private preserves, wild animals face extinction risk by the action of poachers and illegal hunters, mafias who are dedicated to hunting them to sell their horns, tusks, skins, etc., and by bands of guerrillas armed with military rifles and insurgents. They also see their habitats reduced because local farmers and ranchers, who in Africa are none other than the tribes that once lived by hunting and fishing, they need the land for their livestock and crops. So they kill the elephants and lions and leopards that attack their livestock.

Hence the key to preserving the species that provides a rich and varied gene pool distributed in zoos around the world, in excellent food and health importance.

As to the argument that animals are prisoners, I answer that most of humanity spends most of their lives in public transport, offices or factories and finishing work returns home, usually a small department of an average 20 square meters. None of us is absolutely free.

The global overpopulation determines this reality.

Zoo houses 2000 animal species, including 89 species of mammals, 49 species of reptiles and 175 species of birds and add more than 2,500 animals. We must wake up. The dismantling of the Zoo is a crime and should review the entire population in a referendum. Also the value of these species is incalculable and we can never recover. We should also note that many of the animals that is intended to reinstate the natural habitat of the species will die in many cases unable to adapt from being raised in the vicinity of human beings and in the case of raptors you want to release, finished approaching humans in some cases attacking them or their pets and of course will be run over by cars on roads and highways and will be ingested by jet engines.

In the case of the monkeys who want to release in the jungle in Misiones these animals will be quickly killed by the populations of wild monkeys, the reject and will not recognize them because they detect in their smell and attitudes foreign to the species or die from diseases and parasitosis, not to mention the danger that infect wild populations with a virus or bacteria in the environment made ​​the Zoo.

We must save the Buenos Aires Zoo.

The arguments for processing into Ecoparque alleged is for a "paradigm shift" are only the imposition of progressive sociocratic thought driven by social engineers Darwinists of the UN, which aims to create a post-human society and therefore seek to dehumanize and create virtual realities and remove or destroy traditional, religious, folk and musical, historical, moral and cultural values.

And seek to ban bullfighting, Spanish ancient tradition and in Argentina there are movements against jineteada and gaucho skills and soon the activists animal rights try to prohibit until horsemanship, animals in circuses, sport fishing and there are movements anti -Pets!

If we let the "progressive" destroy our essence we will be slaves in a futuristic dystopia technocratic slaving like George Orwell 's "1984" or Aldous Huxley 's "Brave New World", science fiction nightmares or predictive programming ... already they are very close.

Let us save the Zoo!


Posted by Peter Dickinson at 3:47 PM