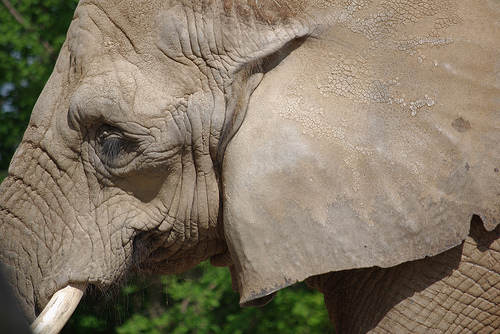 The elephant crates have started to arrive at Toronto Zoo and yet the fate of these animals has still not been properly addressed. It has been wrong all the way down the line. Refresh your memory and read Toronto Zoo Elephants In Trouble.

No-one is in any doubt that a move elsewhere is not the right thing to do, unless of course suitable financial support were given to Toronto, but right now I, amongst so many others who actually genuinely care about these animals believe that the move to the PAWS is the wrong move to make. Euthanasia would probably be a kinder option.

Are the Toronto Zoo councillors really going to sit back and watch these animals move to somewhere where their health is compromised? Are all they really concerned about is their kickback from Bob Barker and their chance to hobnob with a bunch of ignorant celebrities? (I am not including those with a little knowledge here).

Councillor Michelle Berardinetti seems determined to ignore the Tuberculosis issue. In fact she denies that it exists. Hear it from the horses mouth here http://www.newstalk1010.com/shows/joshmatlow.aspx Go to November 6 2011 - Part 2. Councillor Berardinetti has been lamed my name dropping in my eyes. Not something I take great credence from

In 'Toronto Zoo Elephants in Trouble' I asked the question:


"Were the councillors kept in the dark over the TB question?"

Well it seems they were not. Read the three documents below. If the councillors were unaware at an early stage then they certainly not now. What are they going to do about it?


Are elephants really any better off in the so called 'sanctuaries'? Have a think about it.

Deaths in "sanctuaries" under 47:


The age of death in these institutions mirrors the majority of deaths in the AZA... (Source: Wayne Jackson)

It is not to late to save the Toronto animals. To have their wellbeing decided by the people who love and know them best, the keepers and staff of Toronto Zoo.

King Kong Versus The Elephant