Letter from Lahore:
As everyone knows that 5th September, 2009 was International Vulture Awareness Day. 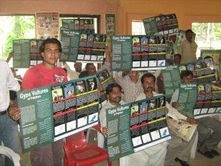 Lahore Zoo Education Department also celebrated International Vulture Awareness Day because Vultures are an ecologically vital group of birds that faces a wide range of threats in many areas where they are naturally occurring. Pakistan is one the country facing alarming decline in vulture population. There were nine types of vultures native to South Asia, adding that eight of these were found in Pakistan. The major decline in the populations of two vultures’ species in Pakistan – the White-backed Vulture and the Long-billed Vulture is very noticeable. The population of these two species has declined by 95% and both are now listed as “critically endangered”, meaning there is no way to prevent the extinction of the species unless serious conservation efforts are undertaken. 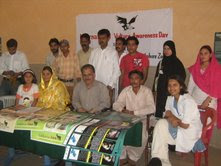 
The decline in the vulture population has been blamed on the extensive use of the Diclofenac Sodium a non-steroidal anti-inflammatory drug (NSAID) which is commonly used in livestock in the Indian-subcontinent for the treatment of lameness, fever etc. It is cheap and widely available. Diclofenac Sodium accumulates in the kidneys of vultures when they feed on carcasses and eventually leads to their death. Diclofenac has been banned in veterinary practice.

Lahore Zoo is one of the oldest Zoos of the world and its major aim is educating visitors on environmental and conservation issues. The Lahore Zoo has many educational, animal welfare activities which are meant to entertain and provide ample opportunities to integrate conservation. In this era of depletion and destruction of natural habitat for wildlife it is duty of zoos to spread the message of animal welfare among masses especially young ones for that purpose.
Zoo education Officer Delevering lecture 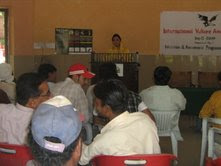 Lahore Zoological Gardens also celebrated International Vulture Awareness Day on 5th September, 2009. A small group of public (adult & child) from different walks of life was gathered at jungle café near Indian Python Enclosure. Syed Zafar-ul-Hasan, Director Lahore Zoo delivered the welcome lecture on importance of vulture and added that Lahore Zoo management planned to house the vulture for their captive breeding after completion Lahore Zoo Master Plan in bird aviary visitors and young students the conservationist of tomorrow will have the chance to see this bird and will make positive efforts to save it.

Mrs. Bushra Nisar Khan Education Officer, Lahore Zoo shed light on ecological role of vultures and showed the pictures of vultures suffering in Pakistan. Mr. Anwar Man Deputy Director, Lahore Zoo added that these birds are biological indicator and help to clean the environment. In end the Zoo Education Officer distributed the vulture posters among the public provided by WWF-Pakistan. The audience gained lost of information assure they are with Lahore Zoo for conservation of this important bird. 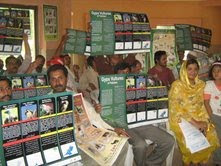 Posted by Peter Dickinson at 10:03 AM