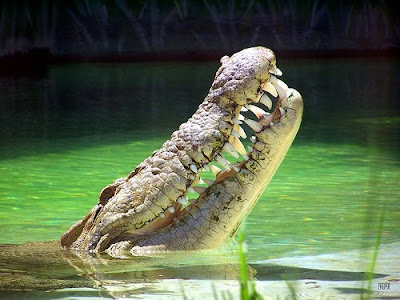 
Thank you to those who sent me the information on the electro-stunning of Alligators and Crocodiles. I admit it, it was all new ground for me. I have only manually caught around 20-25 Crocodilians in my zoo career and some of those many times. I have always relied on speed and judgement and never had to resort to chemical or other methods. 'Electro- Stunning' sounds awful but, having read through several papers this morning I will bow to the experts in the field. All the evidence shows it to be less stressful for the animals and I am all in favour of that.

Some Literature:
From the Australian Government
CODE OF PRACTICE ON THE HUMANE TREATMENT OF WILD AND FARMED AUSTRALIAN CROCODILES


electrical stunning (see paragraphs 73 and 74) has been demonstrated as a less stressful alternative to manual capture techniques, although it may have limited utility in wild situations (e.g. see Joanen and Perry 1971).

An alternative method of immobilising crocodiles is the use of techniques to stun with an electrical charge. Trialled on American alligators in the early 1970s (Joanen and Perry 1971), the methodology was refined and tested with saltwater crocodiles in Australia (Peucker et al. 2004). A study to evaluate stress responses (by measuring corticosol, glucose and lactic acid levels in the blood) of captive juvenile saltwater crocodiles subjected to electrical stunning compared to manual capture by noosing and roping, concluded that the stress response of electrically stunned animals was significantly less than those subjected to manual capture, and recovery was more rapid for stunned animals (Franklin et al. 2002, 2003; see also www.dpi.qld.gov.au/croc/12516.html).

Electrical stunning is achieved by delivery of a 110 V charge for 4-6 seconds (depending on size and body condition of the crocodile) via a set of metal forks placed on the skin on the back of the crocodile’s neck (contact with the cranium or skin osteoderms can greatly reduce the effectiveness of stunning). Crocodiles become rapidly immobilised during stunning, which is then followed by a period of 5-10 seconds of rigor and tail twitching. After this period the animal is relaxed with legs splayed backwards, parallel to the body. Crocodiles remain immobilised for 3-10 minutes, although some individuals may begin to regain movement after about 3 minutes. During the period of immobilisation they can be handled and restrained accordingly. The method requires the crocodile to be wet, and it has been found to be effective with crocodiles housed in both fresh and salt water.

Hatching to Harvest
A report for the Rural Industries Research
and Development Corporation
by SKJ Peucker, BM Davis and Dr RJ van
Barneveld
Stunning equipment to capture crocodiles has been developed that was unique to Australia. This equipment has revolutionised the way in which animals are captured for relocation, measurement, examination and harvesting. Stunning equipment has attracted considerable international as well as national interest because more animals can be handled in a day’s work with less risk and injury to animals and staff alike. The equipment is now used in South Africa, Zimbabwe, Spain, Papua New Guinea and the USA. These countries collectively produce 70% of the world’s crocodilian skins.
Further, stunning as opposed to the traditional method, causes much less stress and fatigue for handlers. However there was some concern, expressed by Animal Ethics Committees, that stunning could be causing more stress to crocodiles. Consequently Departmental researchers collaborated with crocodile physiologists from the University of Queensland to examine stress levels in crocodiles captured by electrical stunning equipment and the traditional method of using a noose and pole.
With the noose and pole method animals do a body roll, struggle and thrash around compared to the quiet and minimal disturbance using the electrical stunning. Blood samples were taken and analysed for stress level indicators. Results demonstrated that capture by electrical stunning is less stressful
for the animal. This finding supports the observation of researchers and producers that animals recover more rapidly from capture trauma and commence feeding sooner if they are stunned compared with being caught by noose and pole.


Comparison of stress induced by manual restraint and immobilisation in the estuarine crocodile, Crocodylus porosus

Abstract
This study compared the stress induced in captive estuarine crocodiles, Crocodylus porosus, by two different handling methods: manual restraint (noosing with ropes) and immobilization by electro-stunning. To stun, a short charge (approx. 6 s) at 110 V was delivered to the back of the necks of C. porosus using a custom-built device, which immobilized the animals for 5-10 min. Immobilized and restrained animals were measured and sexed, and the condition of the skin assessed. Blood samples were taken from some animals immediately after restraint or immobilization. Other animals were returned to their pens to recover for periods of 30 min, 1, 4, 12, 24 or 48 hours after which they were stunned and blood samples taken. Individual animals (mean body length 1.96 m, N=99) were bled only once. Haematocrit and haemoglobin concentrations were measured and plasma samples were analysed for corticosterone, glucose and lactate levels. Following restraint, there were significant increases in haematocrit, haemoglobin, glucose, lactate and corticosterone concentrations in C. porosus. For restrained animals, recovery to baseline levels occurred after approximately 8 hours. The stress response of stunned animals was significantly reduced compared to manually captured and restrained crocodiles. Both groups showed a significant increase in haematocrit, haemoglobin concentration and lactate levels, however the magnitude of change was significantly reduced, and recovery was faster in stunned animals. No increase in either glucose or corticosterone levels occurred with immobilisation. The results imply that immobilization by electro-stunning is much less stressful.
http://era.deedi.qld.gov.au/139/ 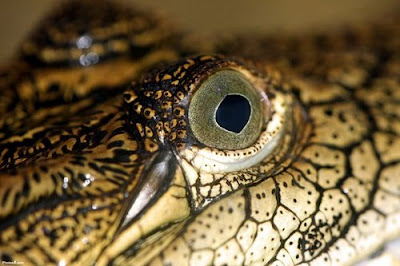 Photo By: http://www.flickr.com/photos/publicdomainphotos/
Posted by Peter Dickinson at 6:44 AM