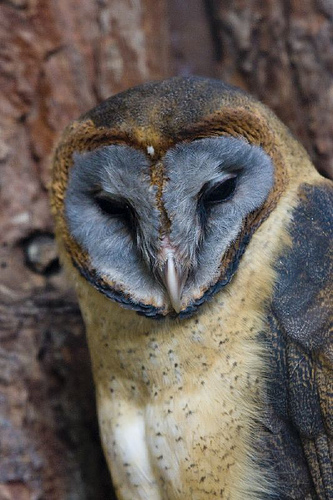 The distribution of the Ashy Faced Owl (Tyto glaucops) the Hispaniola Stygian Owl (Asio stygius noctipetens), the Hispaniola Short-eared Owl (Asio flammeus domingensis), and the Hispaniola Burrowing Owl (Athene cunicularia troglodytes) is restricted to the island of Hispaniola (76,200 sq.km.) with Tortue, Gonave and Beata, three small islands off the coast of Hispaniola, of the Greater Antilles in the Caribbean Sea.

Compared to the distribution of many other Owl species, this is a very small living space and, as history has taught us, not without dangerous consequences for the existence of island Owl species. Ninety percent of the 171 bird species and subspecies that we have lost in historical times lived on islands. Furthermore, one has to take into consideration that each Owl species is not able to use all of the 76.200 sq.km., but is restricted to certain habitats. Therefore, this limits its real habitable area to far below the actual landmass of the island of Hispaniola. In addition to this natural limitation of their distribution range, a devastating development has come into play for these Owls; the human population of Hispaniola has exploded from approximately 5 million in 1950 to approximately 18 million people in 2010. Clearly, this fact alone means loss of much of the original habitat for the Owls, just by human population growth and human activities. In consequence, 85 % of the original habitat of these unique Owls has been replaced by plantations, agricultural land, human settlements and tourist centers.

The Ashy Faced Owl is facing another threat to its existence from the bigger and stronger North American Barn Owl (Tyto alba pratincola) which has been introduced to the island of Hispaniola in a pest control operative for the sugar plantations.. They both now compete for nest sites and space in a shrinking habitat.

To enhance the population of the Owl species and subspecies endemic to the island of Hispaniola and save them from extinction.

We see the future survival of most Owl species as not dependant upon the creation of nature reserves and zoos but, because of the Owl’s adaptability and harmlessness, as dependant upon these birds living among people in a transformed environment of the future. The problem we have to solve is the inability of the Owls to adapt to the speed at which we are destroying the wilderness and the resulting catastrophic consequences. Homo sapiens must find a way, for their own survival, to use nature in a sustainable manner in the near future. This transition period from a nature-destructive human society to a nature-sustaining human society can be used to save some Owl species.

The strategy of this project is aimed at finding a way to make it possible, step by step, for Owls to live among people in a world of the future.

It is conceived to be a combined effort of science, education and conservation. This complex strategy is working so far and this project could serve as a pilot project for saving other Owl species from extinction.

All named Owl species require urgently needed field studies of their local distribution, taxonomy, biology, ecology and ethology with main emphasis on ecological plasticity, ecological potency, molecular and breeding biology, and an ethogram of each species. As it is the case with many subtropical/tropical Owls almost nothing is known about their fundamental needs.

Without this essential information we are not able to guide those Owls successfully into a transformed world of the future. Although the Ashy Faced Owl is entirely endemic to these islands it is not yet understood if the other three Owls are indeed truly endemic. A scientific study is required using DNA of these three other specie of Owls found in the DR to determine how we may best proceed and use our limited funds to the best advantage.

Since we are in contact with the University of Santo Domingo we strongly recommend that the field studies should be carried out by the scientific community of this institution to keep them interested and to become a leading force of this undertaking for the future to come. Our hope is that there is still time left to conduct these studies before the declining Owl population reaches a point where studying the Owls of Hispaniola becomes wishful thinking.

We would like to point out that some of the above listed studies can be done very successfully in combination with the projects listed under conservation approach.

It is of great importance to have the support of many ordinary men and women of Hispaniola. A close relationship between people and Owls presuppose an informed well educated public. This starts with being taught in early years in school to understand and respect other life forms on our planet. We have recently gained the support of the National Baseball team in the DR to forward this Project.

To display Owls, of whom most species are nocturnal, in a way that it catches the interest of many people is not easy, but not so with the Hispaniola Burrowing Owl.
ZOODOM, the only national zoo, run by the government of the Dominican Republic, has the opportunity to build a large and unique open air landscape enclosure for their day active Burrowing Owls. We have already provided the Zoo with the aviaries to do so from international funding.

Watching Burrowing Owls hunting, sun bathing, mating and raising their young, is a true nature discovery lesson without disturbing their counterparts in the wild for the many groups of school children which visit the zoo each day. Provided with the necessary material children in schools could begin to build nest boxes and nest platforms and record the results.

To complement the Zoo displays it is intended to link two schools in North Wales with two similar schools in the Dominican Republic to begin a partnership that can be extended to more children in both countries in the future. This conversation between children from two totally different countries, cultures and understanding of the natural world can only be beneficial to both. With the internet and emails, this is a direct and simple undertaking given the enthusiasm of their educators.

The D.R.O.C. Project now has access to the national daily newspaper in the DR with a “monthly diary” of how the project is progressing and we intend to also use this opportunity to counteract the very firmly held belief amongst most of the population of the Hispaniola’s that Owls in general are “unlucky” at best and “sinister” at worst

To secure a declining Owl population, the first step in a long term survival strategy for Owls must be the build-up of a genetically healthy population under human care. Breeding Owls is a relatively easy, cost efficient and very successful strategy which might create a lot of problems with other birds or mammals.

We have a conservation breeding program in place for two species. The Ashy Faced Owls have already raised over 30 young at Zoodom. The Hispaniola Burrowing Owls have produced seven young. The Hispaniola Short-eared Owl has not yet bred and the Hispaniola Stygian Owl is still not represented in our aviaries for reason of lack of funding.

Valuable knowledge can be obtained about the breeding biology, ethology and vocalisations by having a conservation breeding program to study in captivity as a stabilizer of a declining Owl population. The Zoo in the DR has agreed to send one of their keepers to the UK to learn more about how this can help. ZSL: and Chester Zoo amongst many have agreed to help this new recruit


The populations of Owl species in the wild will have to be supported with artificial nest boxes (Ashy Faced Owl), nest platforms (Stygian Owl), underground constructions (Burrowing Owl) and grass huts (Short-eared Owl).

It will be necessary to trace the degree of acceptance of using those man made nest-sites.

But most importantly, we need the field research in the Dominican Republic and Haiti to understand how we can best help these Owls or indeed, if they need our help.

We consider, in view of the above information, that it would be reckless to consider any island Owl facing these problems, to be safe. We have an opportunity to, perhaps, save a species……..before it is listed an “Endangered”.


IF YOU ARE IN A POSITION TO ASSIST THIS PROJECT IN ANY WAY PLEASE EMAIL: Pam Broughton on Birdangle@aol.com

Learn More About Zoos and Aquariums by visiting
The Zoo Hubs

For Books on Zoo Management and more please visit
The Zoo Professionals Book Store
Posted by Peter Dickinson at 11:32 AM