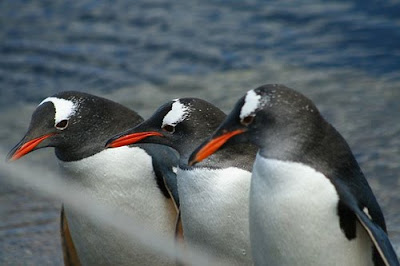 Photo by: http://www.flickr.com/photos/chrispearson72/2377569000/
The mating season for Edinburgh Zoo’s gentoo penguins is well underway offering visitors the chance to see their unique courtship displays and amusing antics all beamed live online on the webcam.

During the mating season large doughnut-shaped nesting rings and pebbles are placed in the enclosures by keepers for the gentoo penguins. The female sits on a nesting ring while the males sift through the pebbles looking for the smoothest pebble to present to their chosen female. Once a pebble has been selected, the male penguins present it as a love token to the chosen female and if she takes the pebble and places it on her nest then she has accepted that penguin as her mate. 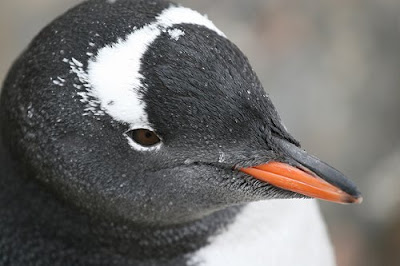 But fear of rejection is not the only concern that the males have. Other males in the group often suffer from ‘pebble envy’ and will attempt to steal the best looking pebbles from other nests to take to their own female.

“Penguins are one of the visitors’ favourite animals in the Zoo and this time of year is always a good time to see them as there is lots of activity going on. Pebble envy is natural gentoo behaviour but as males compete for their female’s affections then we do witness lots of pebble motivated squabbles.”

Easily recognised by the wide white-stripe extending like a bonnet across the top of its head and a bright orange beak, gentoo penguins are the fastest underwater swimming bird. Two eggs are usually laid inside this circle. Both parents tend to the eggs. The resulting chicks will begin to hatch in May and the keepers hope the breeding success of recent years will continue. 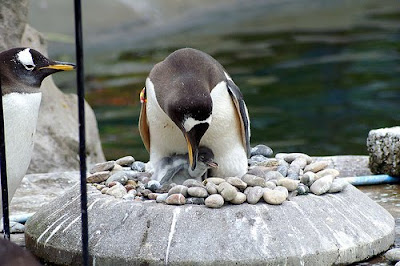 In recent months, staff have also confirmed that the king penguin chick born in October 2009, the first for over five years, is a male. Confirmation was received after a blood sample was taken. The chick remains easy for visitors to spot as it’s covered in fluffy grey feathers. These will remain until it’s around 10 months old.

Posted by Peter Dickinson at 6:05 AM