The Bali Starling – brought back from the edge of extinction A bird on the edge of extinction? Many species are currently in this dangerous position, and our attitude towards this planet brings rare animals and birds closer to this edge daily. According to the latest update in May 2009 of the IUCN Red List, the bird portion of which is BirdLife International’s domain, 12% of known bird species are threatened; and nine new species are listed as critically endangered.

There have been a total of 133 extinctions of documented bird species since 1500, 18 of which have occurred in the last 25 years of the 20th century. Three species have become extinct in the wild in the past nine years, according to BirdLife International.

Human activity is causing the diversity of life on Earth to be lost at a greatly accelerated rate. These losses are irreversible, leaving the Earth poorer and damaging the life support systems we rely on everyday. However, the extinction of the Bali Starling is something that we have within our power to prevent here in Bali.

In 1999, Bradley and Debbie Gardner, the creative forces behind the world-renowned Begawan Giri Estate on the Indonesian island of Bali, set out to breed the Bali Starling with a privately funded captive breeding programme. The Bali Starling had been registered as an endangered bird species by CITES (Convention on International Trade in Endangered Species) in 1970. The bird that had lived in its small corner of Bali for a long time, in modern times was becoming increasingly rare in the wild – and now teetered on the edge of extinction.

Chosen as a symbol of Bali, the Bali Starling’s unfortunate decline seems to reflect the attitude towards the environment of this beautiful island. If we in Bali care about Bali, we must care about its symbol. If we here ensure its survival, we ensure the enduring beauty of its habitat, Bali.

The Bali Starling is a beautiful friendly bird. Preening its head feathers to attract its lifelong mate, and finding its food in the dry grassland forests, it breeds in hollow trees or holes eaten in coconuts.

With its white body, brilliant blue framed eyes, and a touch of black at its wingtips and tail feathers, its beauty has turned out to be a cause of its potential demise. Local and overseas demand led to a drastic decrease in its numbers, and at one point, there were thought to be only 16 birds left living in the wild. Their rarity and beauty made the Bali Starling desired by collectors, their trust made them easily collected.

During the 1960s and 1970s several hundred birds were legally exported to the United States and Europe, to both zoos and private collectors. They and their descendents, perhaps as many as a thousand birds, still live in captivity around the world, unfortunately many of them kept as single individuals. The pressure of man’s expansion has also reduced the area of land available to the Bali Starling.

The Gardners brought four birds back ‘home’ to Bali from the UK in June 1999, their aim to ensure that these birds would breed on their own island, to be released once numbers were high enough.

By 2001, with the establishment of Begawan Foundation, the number of birds had risen to thirty six and a section of the open area at Begawan Giri Estate was filled with carefully designed aviaries, enabling guests to see these endangered birds, and giving the Bali Starlings a safe place in which to breed. The Foundation adopted a professional approach to the project, employing Bali’s leading avian veterinarian, Drh I. G. N. Bayu Wirayudha, to supervise the programme; and the excellent facilities it provided also undoubtedly contributed to its overall success.

By 2005, with a total of 97 birds successfully raised, most of the birds, along with their cages, were moved from the Estate to a newly established bird sanctuary, set up in 2004 by Bayu, who established Friends of National Parks Foundation (FNPF) on Nusa Penida, a small island south of mainland Bali.

Bayu had already begun to prepare for the arrival of the birds and the release of the first batch of them on Nusa Penida a year earlier. One of his most important tasks was to educate local villagers about the importance of their survival. A campaign to communicate with villages within a radius of 2km of the soft release site commenced with a meeting with the most influential village representatives in the community, such as the village leaders and the youth organization leaders.

One of the main factors to be considered when choosing a release site is security, the major cause of bird extinction in Bali. In April 2006, as a result of being approached by FNPF over a period of two years, the Nusa Penida traditional council, which represented 35 villages, unanimously agreed to protect all the birds on the island by passing a local traditional law (Hukum Adat) to protect them. Anyone caught harming them would face both fines and ostracism by the community.

Meanwhile, the birds being prepared for release demonstrated excellent flying skills. Unpeeled and uncut fruit was placed in different areas of their socialisation cage daily. They were also able to supplement their diet by catching insects that were attracted into the cage by a small light. Sprinklers placed on top of the cage dripped water onto leaves inside, and the birds became accustomed to drinking it in order to maximise their water intake at certain times when they were not given any water. They also learned how to get moisture from watery foods and trees, such as the banana palm, and how to find water in holes in trees and from items such as old shells on the ground. To help them identify potential predators, the birds were threatened with large artificial birds, fake snakes, and human beings who were not their keepers.

Finally, on July 10th, 2006, 25 micro-chipped birds were released into the wild during a ceremony that involved local villagers, temples and provincial and local government officials. Microchips were supplied by Theo Pagel, Director of the Cologne Zoo in Germany. 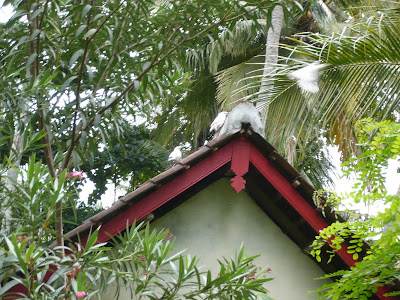 Within two weeks of their release, several birds had paired up and were observed bringing nesting materials to a variety of local trees, ficus, sugar palms and coconuts. Their first eggs had hatched by September 10th, and on September 28th, three birds instead of two were observed on the nesting tree. The first Begawan Foundation Bali Starlings to be released into the wild had started a family!

Twelve more birds were released on December 12th, 2006, and this flock was soon joined by two young birds that were the offspring of birds from the first release.   On April 28th, 2007, President Susilo Bambang Yudhoyono of the Republic of Indonesia and First Lady Kristiani Herawati released a further 12 birds when they visited Nusa Penida to celebrate the launch of a ferry service to mainland Bali.

Further official recognition of the programme came during a visit to Nusa Penida on August 25th by the Indonesian Forestry Minister M. S. Kaban and Dr Ir Tonny Suhartono, the Director General for Forestry Preservation and Nature Conservation, who officially announced that the island was a suitable site for further Bali Starling releases.

The Bali Starling Conservation Project entered its fourth year on Nusa Penida at the beginning of 2009 and has been well-received by the islanders. The birds originally released in just three sites, have spread far and wide around the island. A total of 58 birds have been released from the captive breeding cages, and are known to have survived.

With fourteen chicks known to have hatched in the wild in 2009, the total number of Bali Starling chicks hatched by the end of the year, since the inception of the release programme in 2006, is 70.

The success of Begawan Foundation’s Bali Starling Conservation Project clearly demonstrates that it is possible for a private organisation to establish the nucleus of Bali’s own reintroduction programme. A sustainable flock seems to be in place, thus the decision to move all the caged birds, 38 in total back to mainland Bali, to a new site offered to the Foundation by Green School, near Ubud, in order to set up a new captive breeding and release program.

Green School has been chosen because of its mission to educate a generation of global citizens who are knowledgeable about and inspired to take responsibility for the sustainability of the world. Striving to have the lowest carbon footprint of any international school worldwide, through use of bamboo and rammed earth for its buildings, growing its own food in its gardens, and with plans to generate its own power from the river, this seems to be a most suitable venue for Begawan Foundation to continue its quest to ensure the survival of one of the world’s most endangered birds. With old cages dismantled, and new cages erected, the Bali Starlings will be brought back to the mainland across the Bali Straits on the ferry.

There is the opportunity at Green School to grow the food – the vegetables, the fruit, the mealworms and the crickets – right on site, so there is no reliance on the vagaries of suppliers.

An agreement was finalised in 2009 with Jurong Bird Park in Singapore, who will be sending birds to Bali in 2010 in order to increase the variety of bloodlines, is in addition to a previous agreement with Cologne Zoo in Germany, currently breeding 20 birds along with fellow European Endangered Species Programme (EEP) partners to send across to Bali. It is a new beginning and an exciting new venture!

The Foundation continues to monitor and observe the birds in the wild, tracking where the birds nest and breed, ensuring that each bird released or born is followed throughout its life. This important role ensures that any future releases will be made with planned knowledge of how the bird survives in the wild, what food is required, and how it breeds. 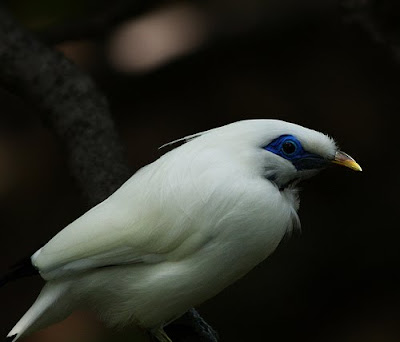 Photo by: http://www.flickr.com/photos/tomsaint/4239006304/
The Foundation would like your assistance to ensure that the Bali Starling population continues to increase. Currently, three different year-long adoption packages have been set up, ranging from a single young bird (USD 550) to a proven pair (USD 3,500). There are seven proven pairs, mated for life and already producing young, with another seven pairs, some recently mated, who have yet to produce young.

These packages offer the chance to adopt a either a single young bird, who will live in the socialisation cage where it will find a mate for life, or a pair of Bali Starlings, who will remain on the Green School site, breeding young to be trained in readiness for future release.

Begawan Foundation would appreciate hearing from anyone who would like to adopt a bird, to make a donation to assist in monitoring the future of the Bali Starling on Nusa Penida, or to assist in the costs relating to further breeding at Green School. As the population of the breeding birds grows, further cages will be required, socialization cages will be set up and prior to release, a training cage will be built where the birds learn to take the responsibility for finding food, water and shelter. Staff will also prepare food, and feed the birds twice a day, as well as assist in the future release training programs. Just contact me directly on adoption@begawanfoundation.org  or Carolyn@begawanfoundation.org  and I will get back to you.
Posted by Peter Dickinson at 11:46 AM