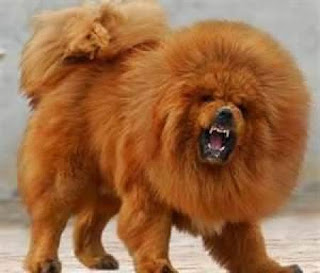 The Luohe Zoo in Henan Province in China has really tickled the fancy of the worlds newspapers. They are competing with each other to come up with the most novel header.


"Mane event: China zoo's 'lion' was living a lie as dog in disguise"

"Lying about its lion, Chinese zoo closed for going to the dogs"

"Chinese zoo shut for going to the dogs"

and endless tales on "Lying about their Lion"

I have read the reports from about two dozen newspapers (there are hundreds more) and none of them are saying much different to this.

Tibetan mastiff passed off as lion!
A zoo in central China has been closed after visitors were outraged to discover its lion was really a bushy and barking Tibetan mastiff.

The dog was not the only fake at People’s Park Zoo in the city of Luohe, which tried to pass off other common mammals and rodents as a leopard and snakes, Chinese media reported.

Photographs showed the mastiff with its muzzle poking through the bars of its dingy enclosure. A grimy sign on the cage read “African Lion” in Chinese characters.

The zoo apologised for the exhibits and was closed down for “rectification”, the Beijing News said, citing local officials. Animal rights activists have criticised Chinese zoos for their record of poor conditions and other abuses.
http://www.thehimalayantimes.com/fullNews.php?headline=Chinese+zoo+shut+for+going+to+the+dogs&NewsID=387603

What all these newspapers seem to be missing is that there is a YouTube video of this story. I urge you to watch it because this is where the real story is. It is only a couple of minutes long but shows some of the worst Tiger Abuse I have ever seen. Why have the papers not taken up on this? Too distasteful?:

Posted by Peter Dickinson at 4:39 AM