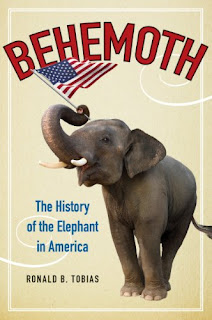 In the two hundred years since their arrival in America, elephants have worked on farms, mills, mines, and railroads, in Hollywood, and in professional baseball. They've contributed to the national discourse on civil rights, immigration, politics, and capitalism. They became so deeply ingrained in the American way that they were once accorded the rights of American citizenship, including the right to vote and the right to provide testimony under oath—and they have incurred brutal punishments when convicted of human crimes. In Behemoth, Ronald B. Tobias has written the first comprehensive history of the elephant in America. As tragic as it is comic, this enthralling chronicle traces this animal's indelible footprint on American culture.


To order this book or learn more please visit