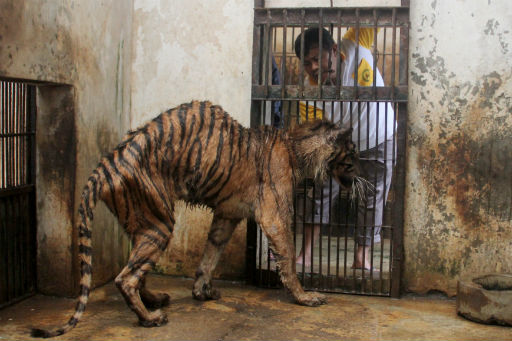 Surabaya Zoo is in the news again. In fact it is rarely out of the news lately. This is compounded by the over abundance of pages dedicated to collecting signatures to close the zoo or rectify a perceived somewhat disturbing situation. Though these signature pages are well meaning they play upon the hearts and minds of the ignorant. The phrases they use such as 'Deliberate Cruelty' are not so different to the newspapers who like to use 'Zoo of Death' or its ilk. Surabaya is neither of these.

It is not perfect but then few zoos are.

There really is nothing new to report. The same faults and unsubstantiated facts are repeatedly dredged up. This is all part of the master plan by corrupt officials to close the zoo and take the vacated prime real estate for building and to direct the numerous zoo visitors towards its commercial competitor.

The most recent ammunition to the armoury of those wishing to close the zoo was Melani the Tiger. Lots of photographs and video appeared. This came from or by permission of those 'running' the zoo. Why on earth would these people show pictures of a starved and obviously very ill tiger. It is almost as if they were demonstrating 'look how clever we are not'. This tiger should not have been on show. In fact if there was any humanity at all she should have been kindly euthanased. But no, it's almost as if it was being deliberately kept in its poor state because it promoted their cause.

There is no question about it but the photograph you see of the tiger above is terrible. What zoo and why would let an animal get into such a state? More to the point what zoo would allow photographs to be taken of an animal in such condition? Unless it helped an agenda of course. In more recent photos her condition is so much better.

The suggestion was that it was the old staff who were to blame for the condition of Melani. Why not the new? They have been running the place for years now.

Nowhere have I seen it mentioned that actually Melani actually arrived at the zoo in a very similar state that you see her in today. So I telling you....Melani was previously the pet of Rudy Hartono, son of retired General R. Hartono. The unfortunate Melani had been fed on a totally inadequate diet of Soto and Rawon (effectively beef stew) and donated to Surabaya as an adult. She was damaged when she arrived.

The recent public outcry has been sufficient to see her moved from Surabaya to Taman Safari. Taman Safari is the nearest competitor to Surabaya. It is a representative of Taman Safari who has been running Surabaya these past few years....does this not strike you as being a little bit odd?

Recent Posting on the WAZA website:
Emergency situation in Surabaya Zoo
WAZA was informed about the recent situation in Surabaya zoo, Indonesia. The story was published in The Sydney Morning Herald : Zoos takes terrible toll on amimals . Although there were some improvements made in this zoo in recent years, the animal welfare situation is in urgent need of change. Even if this zoo is not a member of our organisation, WAZA has contacted the Indonesian Zoological Parks Association as well as the South East Asian Zoological Association and the responsible person in the Indonesian Ministry of Forestry of the Republic of Indonesia in order to take immediate action and stop the cruelty. WAZA has received an extensive letter of explanation from the Indonesian Zoological Parks Association and been informed that “Melani” the tiger has now been moved to Taman Safari in order to get proper treatment. However, Melani being an old tiger is still in bad shape and is in need of special veterinary care. The Association is acting as the temporary management team of the zoo in order to improve the diet, especially for carnivores and is also working on improvements of exhibits.

The Truth About Surabaya Zoo


N.B. Why am I writing about this? Why should I care? Quite simply because I hate corruption and this is exactly what is happening. Corruption is trying to kill Surabaya and no-one else dares to say anything or appears to gives a damn.

For Your Further Information

The Zoo Hubs
Posted by Peter Dickinson at 2:32 PM