Surabaya Zoo Gets it in the Neck again

Surabaya Zoo Gets it in the Neck again 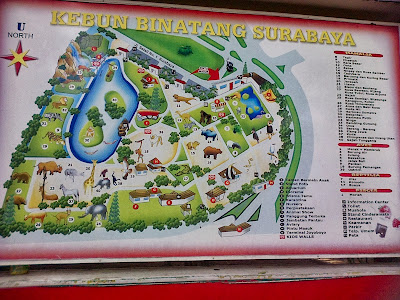 I would like to make it very clear from the very start that I have no special interest in Surabaya Zoo other than making people aware of the other side of the story. This week the collection is getting it in the neck again. A clever article and excellent photos has appeared in major newspapers around the world. As can be expected this has brought on a spate of Facebook posts and Tweets by the well meaning, self styled 'experts' and those with alternative agendas. Some of the tweets are downright lies stating they are photographs taken this week....how this is possible when the animal depicted left months ago?

I have never stated that Surabaya Zoo is a good zoo, far from it, it needs a major overhaul. There is lots needs to be done. It is definitely not the worst zoo in the world and the implications that is cruel suggest that staff are being unkind to the animals......and that is wrong. Are they? Who said that? Prove it! I can't say they are or not.

They say a photograph speaks a thousand words....and they do.....but consider that every one of those thousand words could be a lie. I could go into the best zoo in the world and produce a portfolio of photographs which would make it look like the worst and vice versa. The camera, like the word, lies.

I will freely admit that it is some years since I visited this zoo and it may well have gone way downhill since then...but not according to people whose opinions I respect who have visited.

So here are some links to stories appearing today.....as I said, excellent photos. I was going to pick through the text at length, but I won't. Bear in mind I know nothing but:

I don't like the injury on the elephant calf's leg but it states "The elephant’s owner has tethered the youngster because he prefers to tend to his small shop in the grounds....and....the elephant stands there, being released from his chains only at the end of each day."
How does he know that? I'm not defending the practice but I feel it is unlikely that it is released at the end of the day.

"Emaciated: This camel's ribs were plain to see as it ate grass in its enclosure" Perhaps the camel is ill, being treated...who knows? I don't.

"A former keeper said more than 50 animals have died at the zoo in three months" The words of former keepers need to be taken with a huge pinch of salt.

"Nanik was just 12 years old when she died, a large tumour being found in her intestines"....Animals die, people die. This more or less suggests the zoo caused the tumour.

Anyhow I won't ramble on any longer, I would just ask you to be open minded and as I have said so many times before....Don't believe everything you read in the press.

There is not a shadow of doubt in my mind that improvements need to be made. See below for my previous articles on this collection.

The Truth About Surabaya Zoo

I will be back in Asia for a couple of weeks next month. If anyone wants to finance my air ticket Bangkok-Surabaya return I will provide an honest no holds barred on the situation I find in the zoo.
Posted by Peter Dickinson at 3:24 PM