New effort to save one of world’s rarest spiders 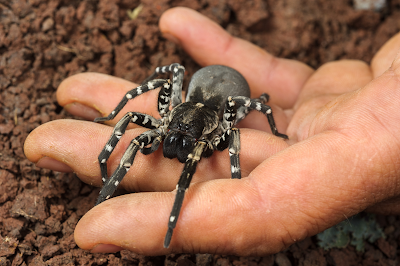 
New effort to save one of world’s rarest spiders

One of the world’s rarest spiders has been brought into captivity at Bristol Zoo Gardens in an attempt to save it from extinction.

It is believed to be the first time the Desertas wolf spider has been held in a UK zoo and it is only found on the Desertas islands, near Madeira, Portugal.

These impressive-looking black and white spiders can grow up to 12cm in size, with a body size of 4cm alone. They are under threat from habitat loss due to invasive grass binding the soil where they burrow and blocking their natural shelters.

The spider has been classified as critically endangered on the International Union for Conservation of Nature’s (IUCN) Red List of Threatened Species but is not protected by any specific legislation.

Bristol Zoo has now joined forces with Madeira Natural Park (MNP) and the IUCN to develop a conservation strategy to protect the species in an effort to prevent it becoming extinct.

Mark Bushell, Curator of Invertebrates at Bristol Zoo, has just returned from Desertas Grande with 25 juvenile Desertas wolf spiders which he now intends to breed at the Zoo with the aim of releasing some of the spiders back onto the island over the next few years.

He said: “Establishing the world’s first captive breeding programme for this species is a fantastic step towards protecting it for the future. It is a beautiful and impressive creature but its natural habitat is being altered by invasive plants. There are simply not enough rocky and sandy areas of habitat left for the spiders to burrow and hide in. The result is a deadly game of musical chairs, whereby the spiders are competing for fewer and fewer burrows.”

There is thought to be a single population of approximately 25,000 spiders left in one area of valley on Desertas Grande – an alarmingly small number for an entire invertebrate species.

Mark added: “In addition to the loss of habitat, one single catastrophic event could wipe out the species entirely. Now we hope to create a ‘safety net’ population here at Bristol Zoo but it will be a steep learning curve as many aspects of the biology of this remarkable species are unknown.”

In future it is hoped that Bristol Zoo’s team of horticulture experts can visit Desertas Grande to work with park rangers to eliminate the invasive grasses which are destroying the spiders’ habitats and help restore the original landscape.

In the absence of native terrestrial mammals, this spider is a top predator in its small habitat. Its main prey is other invertebrates, but it has also been seen preying on lizards.

Bristol Zoo Gardens is a conservation and education charity and relies on the generous support of the public not only to fund its important work in the zoo, but also its vital conservation and research projects spanning five continents.

For more information about visiting Bristol Zoo Gardens, visit the website at www.bristolzoo.org.uk or phone 0117 974 7300.
Posted by Peter Dickinson at 3:23 PM