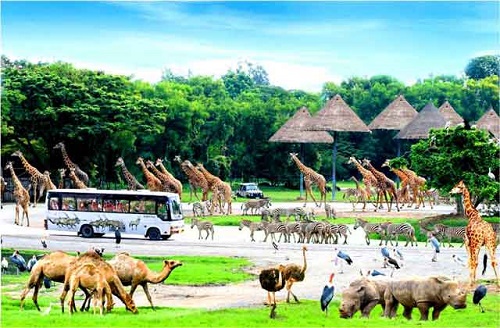 
Over the past five months I have had two approaches from two different Head Hunting companies with regard to a very senior role in Vinpearl Safari Phú Quốc. I like a challenge and I love Asia and so I must admit to being tempted. However I am very happy where I am right now, the work is both challenging and interesting and I have a really great team so I did not follow up on the offers.....did I make the right decision? I wonder.

According to my contacts most of the expat team have now left Phú Quốc , mostly in disgust after the deaths of over 1000 birds and nearly 700 mammals, including twenty Giraffe. Deaths are attributed to parasites, disease, underfeeding and horrific accident. Likely capture myopathy has also played a large part. As this wasn't bad enough in itself around 500 monkeys and numerous birds have escaped into the island. Compounding the wrongs are the arrival of Pangolins and Gibbons of unknown origin. There have been some very disturbing stories doing the rounds for months.....but mostly there is silence. There is nothing in the press. Vinpearl is big and powerful.

The 100 Rhinos? Not all have arrived yet and I hope they don't. Animal dealers and Rhino farmers if they care two hoots about their animals need to step back. I will be more than happy to name them if they don't.

So what to do? Vinpearl has plans for a further two Safari Parks in Vietnam. They need to get this one sorted and up and running smoothly before they take one step further. Right now it is a joke….a sick joke! I recall a similar state of affairs when the Chiang Mai Safari Park first opened. There too there was a refusal to listen to those who knew better. Worse still at the time were the zoos who didn't listen and sent/sold animals to their certain deaths.

Vinpearl Safari Phú Quốc can probably be saved but it needs experienced zoo staff who will be listened to (not ignored)……and their advice and implementations actioned. You can't play zoos, they are not a game. Dealers are out to make a fast buck and their advice and suggestions should not enter the formula at all.

About me:
After more than 49 years working in Private, Commercial and National zoos in the capacity of Keeper, Head keeper and Curator, and sometime Zoo Inspector, Peter Dickinson started to travel. He sold his house and all his possessions and hit the road. He has traveled extensively in Turkey, Southern India and much of South East Asia before settling in Thailand (though currently living and working in Dubai). In his travels he has visited well over 200 zoos and writes about these in his Blog or on Hubpages.

Still living out of his backpack Peter earns his living as an international independent zoo consultant, critic and writer. He describes himself as an itinerant zoo keeper, a dreamer, a traveler, a people watcher, a lover, a thinker, a cosmopolitan, a writer, a hedonist, an explorer, a pantheist, a gastronome, sometime fool, a good friend to some and a pain in the butt to others.

Posted by Peter Dickinson at 3:08 PM