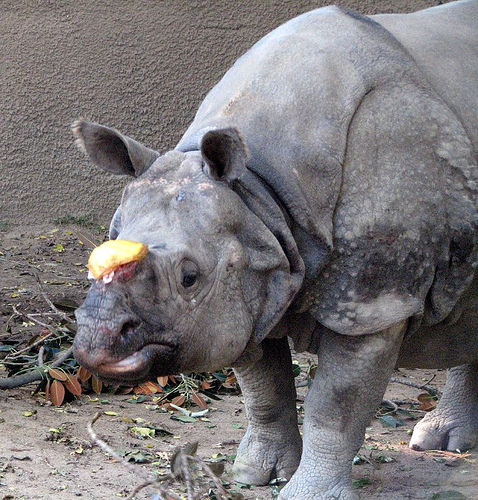 Arrests made in US rhino horn smuggling ring
The US has made seven arrests in a multi-state rhino horn-smuggling ring, seizing $1m (£637,000) in gold ingots.
The arrests come after an 18-month-long investigation, the US Fish and Wildlife Service (FWS) told the BBC.

Rhinos are an endangered species, but their horns are smuggled for buyers who believe they cure cancer.
Fish and Wildlife Director Dan Ashe told the Los Angeles Times the arrests had "dealt a serious blow to rhino horn smuggling both in the US and globally".

"The rhino is an animal of prehistoric origin that is facing possible extinction because of an illegal trade for its horns on the black market that is driven by greed," Ignacia Moreno, assistant attorney general for the Justice Department's Environment and Natural Resources Division told the Associated Press news agency.
Authorities seized $1 million in cash, diamonds and Rolex watches bought with funds from the sale of smuggled horns, along with 20 rhino horns.

The investigation was undercover until alleged trafficker Wade Steffen and his family were stopped in a California airport with $337,000 in their luggage.
Officials said they had intercepted at least 18 shipments of rhino horns from the Steffen family and an exotic animals auction house owner.
Three of the alleged traffickers, Jimmy Kha, 49, his girlfriend Mai Nguyen, 41, and his son Felix Kha, 26, were detained in southern California.

It is thought that Mr Steffen had been sending supplies to the Khas from 2010.
Three others - Amir Even-Ezra, antiques expert David Hausman and Jin Zhao Feng, a Chinese national - have also been taken into custody.
Only about 30,000 rhinos remain in the world, with only hundreds of certain sub-species.
When smuggled, the horns
READ THE FULL STORY HERE

Posted by Peter Dickinson at 12:31 PM