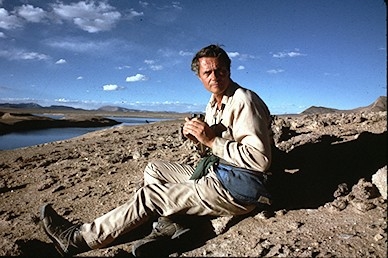 Dr George Schaller is a veteran ecologist affiliated with two conservation organisations in New York, Panthera and the Wildlife Conservation Society. Spending much of his time during the past six decades in various countries of Asia, Africa and South America, he has studied and helped protect species as diverse as the Tiger, Mountain Gorilla, Giant Panda and Tibetan Antleope. In addition, he has promoted the establishment of about 15 protected areas. His studies have been the basis for his scientific and popular writings, including a number of books, among them The Serengeti Lion, The Deer and The Tiger, The Last Panda and Wildlife of the Tibetan Steppe. Dr Schaller’s work in India on the deer and the tiger was considered by many as one of the first scientific studies of wildlife on the subcontinent. Schaller's conservation honors include a Guggenheim Fellowship and the World Wildlife Fund's Gold Medal for "Contributions to the understanding and conservation of endangered species." Schaller has also been awarded the International Cosmos Prize, the Tyler Prize for Environmental Achievement. Schaller's literary honours include The National Book Award(for The Serengeti Lion in 1973). In September 2008, George Schaller was awarded the Indianapolis Prize for his work in animal conservation.


George Schaller was in New Delhi in India to attend the Global Buddhist conference session on ‘Buddhism and The Natural World’ held from 28th to 30th November, 2011. He talks to Shubhobroto Ghosh in this interview on his life’s work and principles.

Shubhobroto Ghosh : 1) What is your inspiration for conducting natural history work?

George Schaller : I like to watch animals. Just to see what they do. I like to write biographies of different animal species. I also feel a very strong moral obligation to help protect what I study. As one of my teachers commented, “The science is fine but you also need to look at the precious intangible values of a natural area.” I have been involved in wildlife science and conservation for sixty years now. I want to do it for another sixty years but that may not happen. I write articles and books to raise awareness and heighten compassion for animals. In India, Indira Gandhi’s work in conservation was inspirational because she prohibited hunting and promoted conservation. Field biologists in this country are superb and I find their work inspirational They are training a new generation of wildlife biologists.

Shubhobroto Ghosh : 2) What are your views on trophy hunting ?

George Schaller : Trophy hunting inflicts unspeakable pain on another creature solely for pleasure. However, it can have conservation value if money generated from it goes towards protected natural areas and helping the local communities.

Shubhobroto Ghosh : 3) What is your view on the differing philosophies of animal rights, animal welfare and conservation?

George Schaller : Animal rights has a basis as do animal rights activists. So does animal welfare. Sentient beings have a right to exist. As a biologist, I look at the preservation of the species rather than the individual.However, as I said, all these concepts have intrinsic value and should be used to save species and their habitat. Every area contains thousands of animals and plants that are all part of an ecosystem.

Shubhobroto Ghosh : 4) What are your views on using live bait to study carnivores?

George Schaller : Admittedly I have in the past been ambivalent about doing this, but have done it when studying tigers and snow leopards. As I get older, I realise it is not an ethical thing to do. Today alternatives exist like camera traps.

Shubhobroto Ghosh : 5) Which Indian wildlife biologists do you admire?

Shubhobroto Ghosh : 6) Which figures in conservation in the world have inspired you the most?

George Schaller : I think Aldo Leopold’s book ‘A Sand County Almanac’ should be necessary reading for every conservationist. I like the work of Edward O Wilson and the way he synthesises knowledge and his broadness of intellect. Sir Peter Scott had great communication skills and did a lot to raise awareness on wildlife in Britain and elsewhere. I also admire the works of David Attenborough and Jane Goodall. Attenborough promotes wildlife issues superbly and I have known Jane for the past fifty years.

Shubhobroto Ghosh : 7) What are your views on zoos? I note you criticised the role of zoos in Giant Panda deals in ‘The Last Panda.’

George Schaller : Every institution can be criticised in some way. There are good zoos and poor zoos. Zoos have to consider the social life of the animals they keep in captivity.The point is that there are too many of some species in captivity. In the US there may be over 4000 tigers, most of them in private hands not zoos, and China has over 5000 in breeding farms. These animals will never see the wild again and do not contribute to conservation. There are only about 3500 tigers left in the wild in total with India having half of them. Tigers are gone from Cambodia and probably VietNam : there are fewer than 15-20 in Laos, China and Myanmar.

Shubhobroto Ghosh : 8) How do you deal with the conflict between human rights and animal rights? What do you say to the argument that there are many human problems to solve than worrying about species extinction and saving wildlife?

George Schaller : This is a good question with no easy answer. If animals come into direct conflict with humans they need to be dealt with. I think maneating tigers should be shot. Elephants that raid crops need to be kept out of agricultural areas. The principal issue is to reduce conflict between man and animal. Regarding human rights and animal rights, you can do both, even in poor countries. The basic thing to remember is that we are wholly dependent on species, on the natural community for survival. When we destroy nature, we destroy ourselves. Everything we need, want, use and buy comes from nature. So we must protect it and all its species, but try to mitigate problems.

Shubhobroto Ghosh : 9)How do you think different countries can cooperate for conservation?

George Schaller : I want to study and save wildlife and have no other agenda. I have worked in countries with widely different social systems. There can be good transborder conservation initiatives like the International Peace Parks Initiative between Tajikistan, China, Pakistan and Afghanistan. This project will help to save Snow Leopards and Marco Polo Sheep and contribute to the livelihood of the local pastoralists by protecting their rangelands. For example, India can undertake conservation initiatives with China in Arunachal Pradesh. It is a must to have international cooperation at the global level as well as regionally for effective conservation.

Shubhobroto Ghosh : 10) How would George Schaller like to be remembered?

George Schaller : I would like to be remembered as having contributed to conservation in countries where I have encouraged young conservationists to continue this work. This will be my lasting legacy.

Shubhobroto Ghosh : Thank you Dr Schaller, for your time and trouble.

Shubhobroto Ghosh is a former journalist for the Telegraph newspaper whose work has also been published in the Times of India, The New York Times, Statesman, Asian Age, and the Hindu. Ghosh has been active in animal protection issues since the early nineties and has been a member and supporter of several animal protection organizations, among them Durrell Wildlife Conservation Trust, Born Free Foundation, People For Animals, WWF and Beauty Without Cruelty. He has worked at the Wildlife Trust of India, was project coordinator for the Indian Zoo Inquiry sponsored by Zoocheck Canada, and did his Masters thesis on British zoos.

Posted by Peter Dickinson at 6:26 PM